A Week Without Mirrors 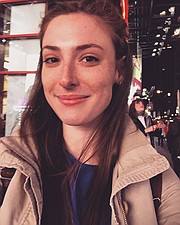 When you pledge to not look at your reflection for a week, it feels good to see the things you love about yourself at first glance. Your perception slightly shifts from the worries of your appearance and flaws to the tangibility of your skills and who you are as a person.

Every time I looked in the mirror before now, I found something I was unhappy with. It's as though I was studying my face to tweak it in my own virtual Photoshop project. I would click "save" before walking away and reopen the document when I made my way back to any mirror.

It is inevitable to avoid seeing your reflection for an entire week. We live in an age consumed by smartphones, Snapchat, front-facing cameras and a reflective surface with nearly every 100 steps we take.

So, when faced with a 2007 Britney Spears quarter-life crisis, what are your options? (One that doesn't involve buzzing all your hair off.)

The answer: Pledge to go mirrorless for an entire week.

It sounds like public indecency for everyone you might encounter, but the truth is, it isn't necessary to use a mirror everyday—if at all.

I was hoping that by the end of the seven days, I would have a life-changing epiphany to share with everyone. Although small, my realization felt larger than life: I realized how much I loved who I saw looking back at me.

A couple of weeks ago, the girl standing in front of the mirror could point out every flaw and imperfection she saw. For example, her Middle Eastern nose didn't fit the standard definition of American beauty, and she didn't have the textbook definition of a bikini-ready body.

Social media has exploded with body-positive icons such as Tess Holliday, 30, a plus-sized model who launched the #effyourbeauty standards movement on Instagram. The campaign spreads awareness of how every individual defines beauty himself or herself and does not have to forfeit to the industry's perception of what is or is not beautiful.

After that week, I felt a glow about myself that I hadn't seen before. All my previous imperfections were characteristics of which I now became inherently proud. Suddenly, everything these body positive social-media icons were saying finally made sense.

So, what was it about the magical mirror that transformed my perception? The easy answer is that my body image was not the focus at the start of my day, or at the end, when I would brush my teeth staring at my reflection. My day started off focusing on my priorities, which for the first couple of days included hoping I didn't look like a disaster and losing my contacts when attempting to put them in, but slowly transformed into my daily goals and inspiring me to take on new interests and hobbies that had fallen waist-side.

They say, "Beauty is in the eye of the beholder," and as cliche as it sounds, the definition of the beholder is you. Although beauty is still seemingly in the hands of mega-corporations and advertising moguls, women are fighting back. The #effyourbeautystandard campaign, among many other body-positive icons on social media, are making self love the new fashion statement.

The more complicated answer involves a bit more digging, though. Not having a reflection to use as a platform to tweak or primp leaves simply looking down at your body. You begin the week by studying the canvas below you, not sure what to make of it. You might see stretch marks here and there, or small pimples in places you would really rather not have them. Then, you might indulge in a solo dance party to lighten the mood only to become disheartened when the viral "thigh gap" is a concept alien to the skin rubbing between your own thighs. The thing is, it's a process. This campaign and the mirrorless project is not a magical fix to years of being told, "You are not enough."

Self-love is a process that takes not giving up on yourself.

What going mirrorless for a week does give you is a newfound appreciation for what you take for granted—you.

Editorial intern Onelia Hawa is an average 20-something-year-old Atlanta native, and a journalism and nonprofit graduate from Southern Miss. She is bilingual, a foodie, activist and lover of all things Frida Kahlo.