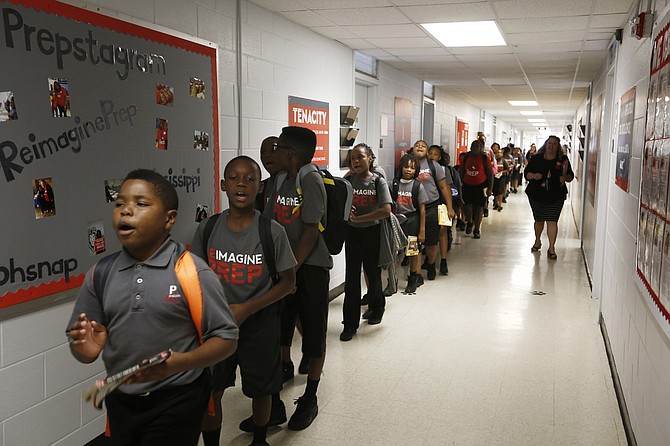 Jackson mom and business owner Tracie James was dissatisfied with the lack of one-on-one opportunities at school for her youngest son, formerly a North Jackson Elementary School student in Jackson Public Schools.

But last year, James found a new option for him: charter schools.

Her son is now in fifth grade at ReImagine Preparatory School, one of two charter schools that have just opened in Mississippi in the last year.

Nationally, publicly funded but privately run charter schools have become an answer for urban families desperate for options beyond the seemingly low-performing schools within the barrier of their zip codes. The only two charter schools in the state so far, ReImagine Preparatory School and Midtown Charter School, operate in Jackson.

The Jackson Public Schools district hosts a variety of educational options with magnet programs and academics that serve its students' varying academic and future professional interests. Still, at ReImagine Prep, James says her son is happy. He gets the benefit of more opportunities for one-on-one classroom instruction and is on a trajectory to be reading at a seventh-grade level by the end of the school year.

"For me, I can't with good conscience say JPS has failed us," James said. "I feel like we have failed our children on many levels by not electing the right people to the state Legislature and to Congress."

Her son's charter school may be the right choice for him right now, but James still doesn't believe charter schools are a cure-all for the education system. She also agrees with many charter-school opponents that the public-private hybrids serve a dark purpose. "Charter schools were created to dismantle the public-school system, as far as I'm concerned," she said.

James is a full supporter of public schools, a product of Jackson Public Schools by way of Jim Hill High School, and of her own upbringing by a family of educators. She worries about the plight of public schools, especially those JPS serves.

The undermining of teachers due to legislative failures and generational and cyclical poverty together have created an educational system that is hard-pressed to fully serve all of Mississippi's children's needs, James says.

"I believe that the issue goes much further and much deeper than with the district itself. For the most part, it's a symptom of decades of neglect, not only from the State of Mississippi, but also from respective federal regulations," she said.

The U.S. Census Bureau backs her up: In fiscal-year 2013, Mississippi spent $8,130 per pupil in public and secondary elementary schools, the fifth-thriftiest state as far as per-pupil spending.

Still, like many parents, James is frank that she had to make the best decision for her child, a smart and energetic boy who got bored easily when he finished his work too early in class before. Now, he gets bonus points for choosing to read quietly instead when he's done.

"I couldn't make a political stance that was going to be to the detriment of my child. I fully support public schools. But my child needed a different situation," she said.

"Had the charter schools not passed, I would've been working two jobs to put my kid in a private school."

Legislation this session may change that, however.

On Monday, SB 2161 passed, authored by Senate Education Committee Chairman Sen. Gray Tollison, R-Oxford. The bill would authorize open enrollment to students in C, D or F districts who want to attend charter schools. House Bill 1044, authored by Rep. Charles Busby, R-Pascagoula, mirrors that bill. It passed the House March 28; should it become law, all students who live in D- or F-rated school districts would be eligible to attend charter schools anywhere in the state.

Under the current law, charters can only operate in D- and F-rated districts in the first place. Should its pending Senate amendment pass, it would extend open enrollment to C districts as well.

Charter schools are already contentious within the state of Mississippi. Though there are only two now, this year will see the chartering of two more in Jackson. Charter schools siphon students, specifically the MAEP dollars attached to their attendance, away from public schools that are already underfunded by a billion dollars in the state under the Mississippi Adequate Education Program, which the Legislature routinely refuses to fully fund.

Though school attendance is the basis of MAEP funding for all public schools, critics don't believe that charter schools are public at all, and that public money should not go toward "private" schools.

Mississippi Association of Educators President Joyce Helmick goes as far as to call charter schools "private charter schools," saying that their test score reporting standards or teacher criteria don't match that of regular public schools, and that their lack of transparency disqualifies them from truly being "public."

With HB 1044, not only MAEP dollars, but also ad valorem taxes, which is the dollar amount attached to students based off the local tax contribution to education where they live, would follow students across district lines. In short, citizens of one district would possibly help foot the bill to educate students who aren't required to live in their communities.

Busby says he would support measures for students to attend regular public schools in districts in which they don't live—if he knew whether or not it was constitutional.

"I haven't drafted it (the legislation), but it's drafted every year," Busby told the Jackson Free Press. "I don't think it's met with much exception. I just want to make sure that we don't have any constitutional issues when we do that."

"Parts of the (Mississippi) constitution that may dictate that the ad valorem taxes collected in a school district can only be utilized by schools in that district," Busby said, to clarify potential constitutional issues.

Rep. Jarvis Dortch, D-Raymond, says the push for open enrollment in charter schools but not regular public schools can be explained by more spurious methods.

"I believe the thought is that the charters (in the future) cannot be sustainable operating within one small rural school district," Dortch told the Jackson Free Press. "So there is a push to allow them to reach across district lines to poach students from a number of neighboring districts to reach a critical mass."

Sierra Mannie is an education reporting fellow for the Jackson Free Press and The Hechinger Report. Email her at [email protected]. For education coverage visit jfp.ms/education.

A previous version of this story stated that Mississippi's current charter schools were part of Jackson Public Schools. This is incorrect. We apologize for the error.