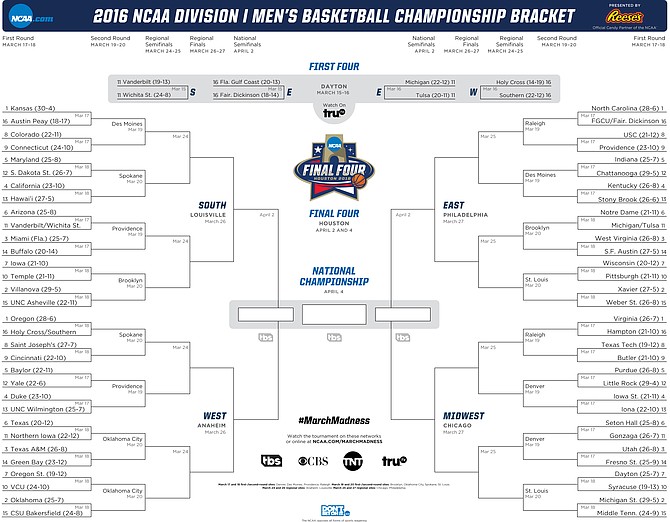 There are some things to know before fans fill their brackets for the 2016 NCAA Men’s Basketball Tournament. Photo courtesy NCAA

While no college or university from the state of Mississippi made the 2016 NCAA Men's Basketball Tournament, it still could offer one of the craziest years for March Madness in recent memory. This season was historically wild. Here are some numbers to put the unpredictable regular season into perspective.

Teams that ranked in the top 10 lost 74 times, the most since the Associated Press started its top 25 poll in 1948. The teams in the top five were upset 37 times and 21 of those upsets came to teams that were unranked. That tied the most losses in a regular season for top five-ranked teams.

Want more madness? No team who took the top spot was able to stay safe this season, as the No. 1 teams went down seven times during the regular season, which was the most in top 25 history. This is also the first time in the 77-year history of the NCAA Men's Basketball Tournament that every team entered with four or more losses.

Only the University of Kansas (a favorite to win it all) and the University of Arkansas at Little Rock (a team that could be a dangerous 12 seed in the Midwest bracket) have four losses. The other 66 teams in the field have five or more losses.

Could the craziest regular season also give us the craziest tournament ever? The jury will be out on that until the end of the first weekend at least, but there are some things that we all should know before we fill out our brackets.

A No. 1 seed, of course, has never fallen to a No. 16 seed, and a No. 2 seed hasn't lost to a No. 15 seed since 2013. But the last three years have seen No. 14-seed teams upset No. 3-seed teams. Could the University of California, Berkeley fall to the University of Hawaii at Manoa, or could Iona College upset Iowa State University?

Meanwhile, it's been a coin toss whenever No. 11 seeds have taken on No. 6 seeds, with both groups scoring an equal number of wins since 2010. History, on the other hand, has shown greater favor to the No. 6-seeded teams, which have won 65 percent of their matchups.

Don't get caught up in picking No. 10 seeds to score wins against their No. 7 seed dance partners. The last three years have seen seventh-seeded teams win nine of their 12 first-round games, and the No. 10 seeds haven't won more than two meetings per tournament since 2010.

Of course, face-offs between No. 8 seeds and No. 9 seeds have been a dead heat. Historically, the resulting games have been 63-61 with the slight advantage going to eighth-seeded teams.

One last thing when filling out your bracket: The lowest-seeded teams to have reached the Final Four—Louisiana State University in 1986, George Mason University in 2006 and Virginia Commonwealth University in 2011—were all dealt the 11th seed.

Or you could just go all chalk, which means you take the better seed in each game.