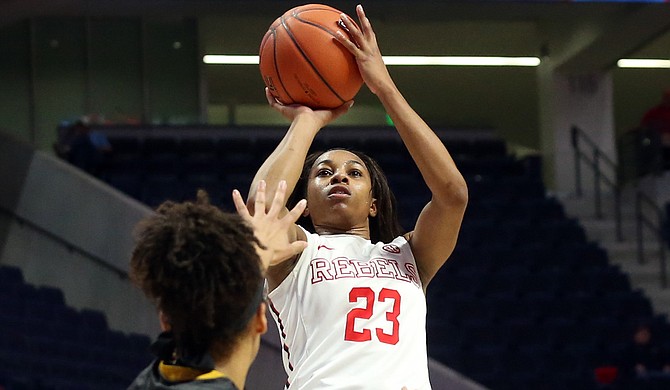 With all the success the Lady Bulldogs basketball team is having this season, you probably have heard about Mississippi State University's rising star, Victoria Vivians. However, the University of Mississippi has its own budding women's basketball star, too.

Shandricka Sessom has been one of the bright spots for the Rebels this season as they have tried to rebuild their women's basketball program back to being a winner. The former Byhalia High School athlete's season ended with her putting up 17 points, two rebounds and an assist as she lost 74-59 in a duel against Bay St. Louis native Christa Reed and Vanderbilt University in the opening round of the 2015-2016 SEC Women's Basketball Tournament.

Sessom, Vivians and Reed are a trio of sophomores with Mississippi roots who are going to be major players in the SEC over the next two seasons. All three women were highly sought-after high-school recruits during their senior season of 2013-2014. ESPN named Sessom a three-star recruit, and she was ranked as the 18th best guard in the nation and the sixth best player in the state as a four-year letter winner at Byhalia High School. She finished her senior season with an average of 21 points, 12 rebounds, five assists and four steals.

As a freshman at UM, Sessom got off to a slow start, averaging only 5.3 points, playing in 31 games and starting 23. Some of her highlights during that freshman season included a game where she scored 21 points, and had nine rebounds, five steals and three assists against Mississippi Valley State University. She was the first woman in UM's history to score 20-plus points as a freshman.

Sessom had a breakout season as a sophomore as she averaged 15.6 points per game this season, along with 5.1 rebounds and 1.7 assists per game. She is No. 6 in the conference in scoring and No. 10 in field-goal percentage with 37.3 percent. She also scored 20 or more points seven times this season, a career-high 28 points against the University of Arkansas at Pine Bluff and 26 points against the University of South Carolina, the most any individual has scored against that team this season.

Sessom's success didn't go unnoticed, as she is a one of the three finalists for the Gillom Award, which the best women's basketball player at a four-year university or college in Mississippi receives.

Sessom competes against two other finalists for the Gillom: Vivians and Delta State University's Chelsey Rhodes. They join the three male finalists for the Howell Award, which the best men's basketball player at a Mississippi four-year university or college receives. Stefan Moody of UM and Gavin Ware and Quinndary Weatherspoon of Mississippi State are this year's nominees.

Fans can select the player that they believe should win the award, comprising 10 percent of the voting with the other 90 percent coming from statewide media.

Voting for both awards began Tuesday, March 1, and will end on Sunday, March 6, at 8:30 a.m. Fans can visit www.csopavoting.com or cast votes through Facebook, Twitter and text message, voting up to three times per day.

Both the 2016 CSpire Gillom and Howell Award will be given out on Monday, March 7, at a luncheon program at the Mississippi Sports Hall of Fame and Museum (1152 Lakeland Drive, 601-982-8264). Tickets for the event are $40 and can be obtained at the MSHOF offices or online at www.msfame.com.