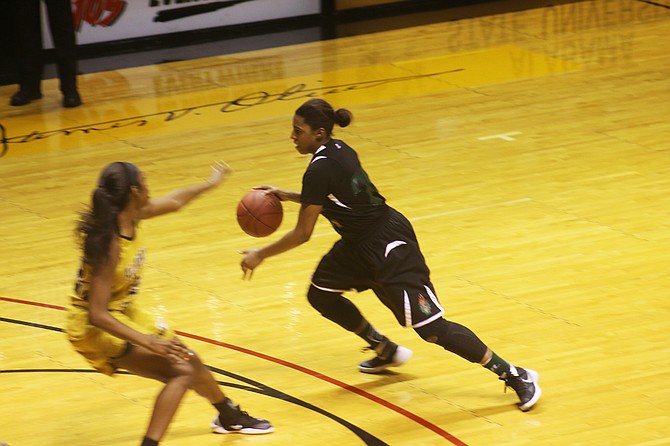 Mississippi Valley State University senior guard Christina Reed earned preseason first-team All-SWAC honors earlier this year. Eight games into this season, she has lived up to the votes that coaches and sports information directors gave her with her play. She is the top scorer in the conference and is ranked in most statistical categories.

Reed is leading the Delta Devils with an average of 16.3 points, 1.9 assists and 29.1 minutes played per game, with 30 steals overall. She is also second on the team in rebounds at five per game, and has taken and made more three-point shots than anyone on the team.

Before arriving at MVSU, the 5-foot, 10-inch guard played at Gentry High School in Indianola, Miss., where she was named MVP and All-District. Reed began her high-school career scoring 12 points per game and 12.6 points in the following season.

She became a breakout star as junior, scoring 17.1 points per game. In her senior season at Gentry in 2012 and 2013, Reed played in eight games, averaging 7.1 points per game, before injuring her ACL, which ended her season.

As a freshman at MVSU, Reed appeared in 22 games, scoring 4.9 points and grabbing 4.4 rebounds per game. She improved as a sophomore, appearing in 29 games and averaging 11.3 points, 6.8 rebounds and 1.6 steals per game.

Reed upped her game even more as a junior, even though she only saw action in 20 games. She averaged 16.5 points, 6.9 rebounds and two steals.

This season, Reed has played sensationally and scored double digits in six out of eight games. She scored a then-season-high 25 points early in the year against Tougaloo College in the Delta Devils' 99-55 win.

Her lowest point was scoring just two points in an 80-46 loss to the University of Alabama at Birmingham. She followed up that game with eight points against Baylor University in a 101-36 loss.

Reed scored her season-high 26 points against the University of Wisconsin and followed that up with 20 points against Blue Mountain College. MVSU lost 103-61 to the Badgers but won 66-40 over the Toppers.

Reed's play against Wisconsin and Blue Mountain earned her the title of the Southwestern Athletic Conference Women's Basketball Player of the Week for the fifth week of the season. She added eight rebounds and five steals to go along with her 26 points against Wisconsin and was a steal shy of a triple-double (three double-digit statistics) against Blue Mountain with her 10 rebounds and nine steals.

Reed has currently scored 895 points in her college career and is on pace to top 1,000 points. When she reaches that mark, MVSU will have two 1,000-point scorers on the roster between her and senior forward Ashley Beals, who has 1,104 career points.

Reed and Beals would be the seventh active duo in the nation that has scored at least 1,000 points each. MVSU and Reed return to action on Dec. 17 at 3 p.m. when the team hosts the University of Colorado.