What Black Dads Do: First Class Father Present for Duty 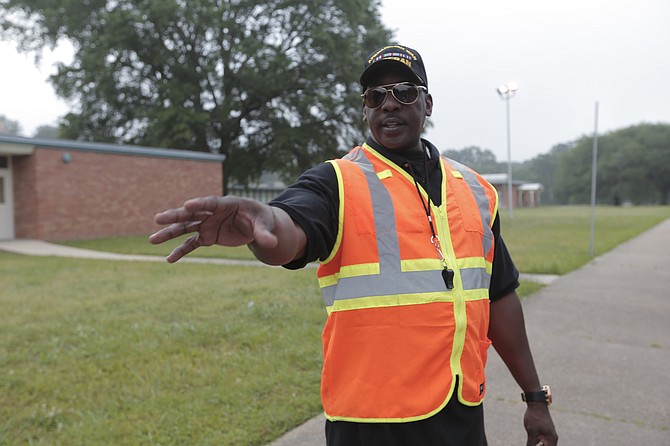 Retired U.S. Army Sgt. 1st Class Steve Collins opens every third set of doors in the carpool line at McLeod Elementary School; the two other volunteers to his right get the first and second cars.

Tall and strongly built, 46-year-old Collins looks dead serious in his black Army Veteran's hat and aviator sunglasses on a spring Tuesday morning, but his smile is welcoming, ebullient, just like his flashing orange crossing guard's vest, which matches his equally brilliant orange Nikes. This system of staggering the cars to help the flow of traffic is a good one, Collins says.   Things run smoothly.

Some of the vehicles crawling into the carpool line are brand new and freshly washed. Others are riddled with holes and dents. It's Collins' job to help unload the precious cargo inside, and greet them before they scurry up the cement walkway into the schools.

Steve Collins (left) and Fredrick Nolan (right) are both active members of the WATCH D.O.G.S. program in JPS. Nolan is the coordinator for JPS.

"There are a lot of pot holes out here," Collins says as he gestures to a parent to drive around one right at the curb of the school on Sandlewood Place, where he greets kids most mornings. Sometimes, he says, children trip and fall in them when they get out of the car. When it rains, the potholes flood with water, making it even harder for the kids to get up the walkway to school safely.

"Maybe I'll go to the CDC (Career Development Center) and see about getting a ramp built, so the children can walk on that when it rains," he said. He opens the door to a truck where a little girl sits up high. Without a word, he picks her up out of her seat and places her gingerly on the sidewalk. She toddles past on her way to the entrance of the school.

Collins is a problem solver at McLeod Elementary, where two of his children attend. He brought 20 new coats to school when he noticed some students not wearing them on a cold day, and the next day showed up with stacks of uniforms.

When the school needs extra volunteer hands on deck, he recruits his Army buddies to come help out.

He hosts pizza nights and brings breakfast to the principals. He proctors tests and monitors hallways. He reads to children. He's the PTA president. He's even taken a classroom full of little boys on a field trip to Memphis.

This year, Jackson Public Schools named Collins Parent of the Year for his efforts. Yet, Collins is like a lot of other African American fathers: involved with their children's lives and passionate about their success in school.

What Black Dads Do

A 2013 Centers for Disease Control and Prevention study shows that black dads, stereotypically criticized as being absent fathers, are just as involved in their children's daily lives as dads across other racial groups, if not more. Whether or not they live in the same homes as all their children, black fathers change diapers, communicate with their kids, and help with homework at statistically similar or even greater rates than white and Latino dads.

Collins says he is humbled by his Parent of the Year award.

"I feel very excited about it and very humble about it," he said. "I do what I do because I didn't have a father or a mother in my life, so my motivation was always to do better for my kids than what I had gotten."

Collins' teenage years in Jackson's Virden Addition neighborhood were troubled. That meant he has worried about how to be a good parent without good examples. "So someone at my church told me do the best with your children, and then you'll start the whole sequel of fatherhood, and that's been my example," he said.

It wasn't always easy, though.

Married with four children, Collins was less involved as a volunteer parent while his eldest children were still in school, when he was on tours in Afghanistan and Kuwait after the Sept. 11, 2001, attacks. But when he was stationed at Fort Polk, La., after his last tour, he said it hit him that he needed to do more as a parent.

Sometimes he would take leave and make the four-hour-plus drive from Texas to his hometown of Jackson to spend time with his children and his wife, Stacey, and volunteer at McLeod Elementary School.

Later, he joined WATCH D.O.G.S (Dads of Great Students), a national program that helps dads and other male family members become active volunteers in their school districts. Dads provide a variety of services, from manual labor like building things students need, to providing emotional and personal support through tutoring and mentoring. Jackson Public Schools' WATCH D.O.G.S. coordinator Fredrick Nolan says JPS adopted the program in 2003, but not every school uses it; principals have to opt in and recruit men to participate.

"JPS has since 2003 taken a concerted effort to engage a missing stakeholder in students' education: fathers and men," Nolan said.

The WATCH D.O.G.S. program and the Dads of Destiny Program both come under the umbrella of the National Association of Fathering, Nolan says. The programs enable men to be active parts of the volunteer communities at schools. Nolan says in addition to reading and mentoring, male volunteers come in as extra eyes and ears to help make schools safer.

Moms are often strapped with the bulk of responsibility for the wellbeing of their children, particularly their education, but a 2012 Liberty University dissertation, however, showed that Georgia high school seniors in non-traditional families—that is, students whose parents aren't married, don't live together, and aren't one male and one female—tested about as well as their peers in traditional classrooms.

Still, a University of Florida study found that the benefits of parental involvement from dads, whether or not they lived with their children, was huge: When dads were involved with their children's education, kids were happier, did better in school and had increased chances of attending college or vocational school.

It is not, however, because of some magical element of masculinity that the presence of dads affects student performance. When parents split, students often lose the financial and emotional support offered not only to them, but also to the parent with whom they live, most often the single mother.

Men like Collins often step in where other parents are missing. When his only son, McLeod fourth-grader Li'l Steve, says, "Big Steve, you need to talk to so-and-so," it usually means help for one of his son's friends or classmates. When he arranged to take 30 boys to Memphis to watch a Grizzlies game, helping to foot the bill for students who couldn't afford the trip, they got on the Jumbotron and were invited onto the court to meet the players.

On the trip to Memphis, Collins also took the boys to visit the National Civil Rights Museum, where they were amazed at multiracial activism in the Civil Rights Movement. Assistant Principal Dr. Lutithia Luckett says most of the boys had behavioral problems before they went. After the trip, she said, she couldn't remember any of them getting in trouble the rest of the school year.

"The boys glowed," Luckett told the Jackson Free Press. "They talked about the trip for weeks."

"I have love and compassion for what I do," Collins said. "Some of the students at Chastain and other schools still remember me for something I did nice, or even the parents might see me somewhere and thank me for words of encouragement I gave my child or gave them."