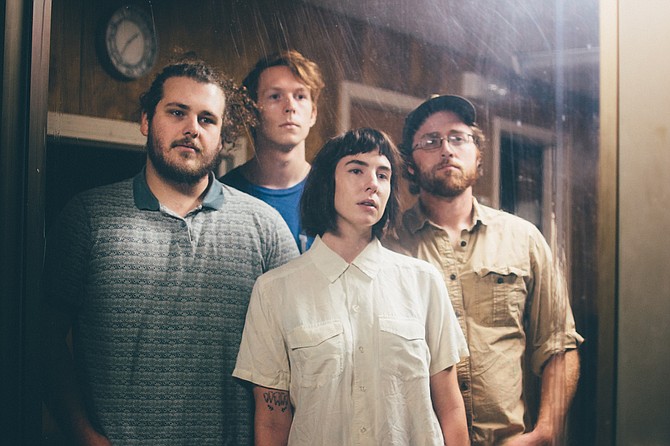 Athens, Ga., has given birth to countless iconic bands and recording artists, from R.E.M. to The B-52s. Its latest export, experimental indie-rock four-piece band Mothers, will be heading to Jackson Friday, April 15, for a performance at Hal & Mal's.

Vocalist and rhythm guitarist Kristine Leschper started Mothers as a solo project in 2013 while studying printmaking at the Lamar Dodd School of Art in Athens. She slowly recruited guitarist Drew Kirby, bassist Patrick Morales and drummer Matthew Anderegg, and soon after, the musicians' small-town lives transformed into a year-long journey, as they toured across the country and released their debut album in London.

"One day we're getting a booking agent, and then all of the sudden, you're looking at the next six months and thinking, 'I'm not going to be home at all or think of music—I'll just be playing,'" Kirby says. "People see the fun part, but they don't see the driving and how the floors and beds are different every day."

Mothers is all about sharing the human condition, he says, even at the cost of oneself. The name of the band comes from Leschper's fascination with the nesting behavior of animals. She had two rabbits and noticed how mother rabbits pull out fur from their own bodies to make nests for their children.

"I think the name Mothers is kind of supposed to represent the idea of sacrifice of yourself for your art and creativity," Kirby says.

Musicians and artists of any sort also tend put themselves fully into what they're creating, he says, and while Leschper is not a mother, the idea of creating something and letting it go out into this world is at the band's core.

Mothers released its first album, "When You Walk a Long Distance You Are Tired," on Feb. 26, only a short time after recording a session on video series Audiotree Live in 2014. The video's success led to the band signing with Grand Jury Records and Wichita Recordings.

"The album happened so quickly, but I like it for that reason," Kirby says. "It is the definition of a snapshot of a really young band, and it is cool to listen to for me because it's really pure and from the gut, and we didn't really have time to think about what was happening. We just did it."

The band's sound incorporates a folk element, but Mothers is purposefully obscure and abstract in its designation. The band instead focuses on writing expansive, personal songs that everyone can relate to. Kirby says the record is about trying to stand up for yourself and about the relatable experiences of life. There is restlessness in the lyrics, he says, and it's really about being courageous in how you feel and in your own sensitivity.

"Being empowered by the things that have hurt you is a healing process in and of itself," Kirby says.