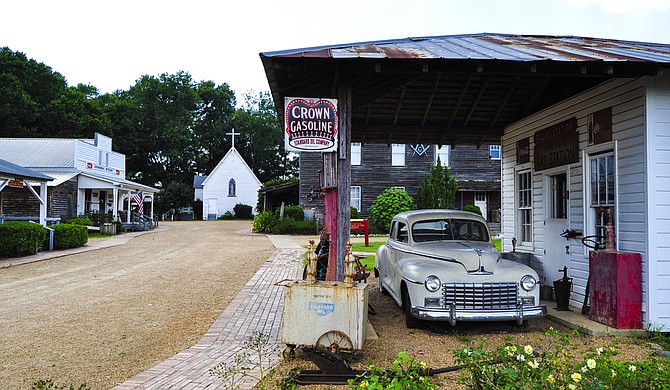 The Mississippi Agriculture and Forestry Museum will host Lane of Lanterns in Small Town Mississippi at the museum. Trip Burns/File Photo

Small Town Mississippi gives Mississippi Agriculture and Forestry Museum visitors a taste of what life would have been like in the 1920s. They can see attractions such as an old printing shop, a filling station, a general store and a Bisland cotton gin exhibit. On April 30, museum visitors can experience something else in Small Town: a pop-up food event called "Lane of Lanterns."

Kathy Williams, the museum foundation's project development manager, says the idea came about around a year ago. The Mississippi Forestry Commission had a farm-to-table event in Small Town, and ever since a fire in 2014 destroyed the Children's Barnyard and Veterinary Infirmary and damaged the museum's maintenance shop, Williams says the museum had been doing a lot of fundraising.

"We thought, 'What better time to do something than this year?' and started this signature event," she says.

She and Jeff Good, who co-owns Mangia Bene, Soul City Hospitality and the Up in Farms Food Hub (the businesses are sponsors of Lane of Lanterns), came up with the idea of bringing the farm-to-creator-to-consumer concept to Jackson. She says Mississippi Commissioner of Agriculture Cindy Hyde-Smith came up with the event and name for Lane of Lanterns.

`"It's actually bringing all three steps together because we're going to have the actual small- to mid-sized farmer there, telling their story of how they're producing goods (and) commodities in Mississippi and the struggles they face and the positives and what they're doing to help bring this farm-to-table movement, making it stronger," Williams explains.

"And then we're going to have the chef there, the creator, to actually use these products at a station and create a fabulous dish."

Each food station, which will be set up in front of the different buildings in Small Town, will have at least one farmer and one chef. The event will feature main courses, appetizers, desserts and samplings of dishes. All proceeds will go toward the museum's foundation. "We all love to tell our stories, and we believe that those chefs and those farmers are going to have some absolutely fantastic stories to share because some of these farms, especially, have been in their families for generations, even if they're small- and middle-sized. It's something that they've carried on for generations. The son or the daughter and in some cases, the son and the daughter have carried on the family tradition."

The event will feature products from Mississippi, from the meats to the produce to even the drinks. Cathead Distillery in downtown Jackson will do samples of its products in addition to creating a cocktail that includes a Mississippi fruit for the event, and the event will also have craft beer. "You have a lot of food tastings, a lot of things like that that go on in Jackson," she says. "What makes this different is the fact that we're going to be telling that story of farm-to-creator-to-consumer. ... We know that people love Mississippi. We know that people love Mississippi food."

The chefs who will participate are Dan Blumenthal from BRAVO! Italian Restaurant & Bar; Pierre Pryer and Andy Nesenson from The Iron Horse Grill; Jesse Houston from Saltine Oyster Bar; Grant Nooe from Grant's Kitchen; Jay Parmegiani of 10 South Rooftop Bar & Grill in Vicksburg; Mike Roemhild from Babalu Tacos & Tapas and Table 100; and Tom Ramsey of Staege. At press time, the farmers had not been announced. Farm Bureau is the event's sponsor.

Lane of Lanterns is Saturday, April 30, at the Mississippi Agriculture and Forestry Museum (1150 Lakeland Drive) from 7 to 10 p.m. In addition to the food, the event will include live music from the Jackson All-Stars and a silent auction. Tickets are $50. To purchase them, text LANE to 91999 or visit the museum. For more information, call 662-473-8600 or visit msagmuseum.org.