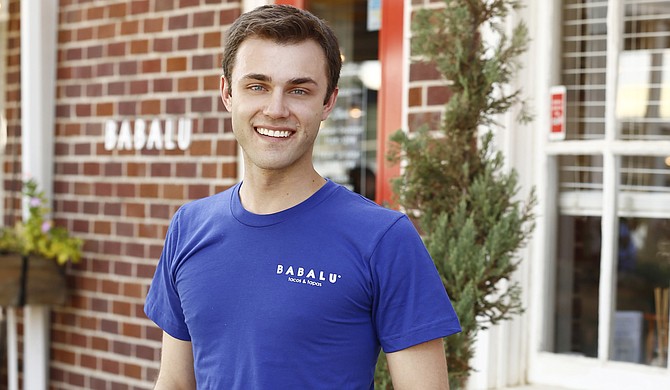 Josh Ferguson is a ball of energy, so it makes sense when he confesses he's only recently become a coffee aficionado.

"I don't really need the caffeine; I already have enough energy," he says.

He says his favorite part of bartending at Babalu Tacos & Tapas is meeting people.

"I love talking to people; this job is the easiest way to connect with people every day," he says. "To know I've had a positive impact on someone is nice, and it's really humbling to be reminded that what you do impacts people immediately and can make their day better. It's instant gratification."

Ferguson, 25, grew up in the small town of Columbus, Miss., where he attended Immanuel Christian School, now Columbus Christian School. He then came to Clinton to attend Mississippi College in 2008.

While studying biological research, he helped pay for his education by working three jobs, one of which was at Applebee's Neighborhood Grill in Clinton.

Finishing at Mississippi College in 2012 with a bachelor's degree in biological research, a former roommate helped get him an interview at Babalu. He started working there the following week, first as a server and later training as a bartender under Barry Bowron and Danielle Vercher.

Besides the people, Ferguson says his favorite thing about bartending is learning new skills.

"There's so much to learn," he says. "At least once a week, a customer will ask for something I don't know about. I want to give people what they want, so I know I'll always be learning things as long as I'm behind the bar."

"I don't really like sweet food; I prefer savory and salty flavors to eat, but I love sweet drinks," he says.

Though happy behind the bar, Ferguson hopes to learn more about the restaurant industry at large and is exploring opportunities within Babalu in management.

His love of learning is evident in his spare time, too. On his days off, he might be found at Saltine Oyster Bar or BRAVO! Italian Restaurant & Bar for a meal but is equally apt to be diving into a book or even his old college notes and textbooks.

Ferguson also credits moving to Jackson with influencing him to want to use his academic background in the sciences and interest in research to make a larger impact on environmental issues. "I want to help change the way Mississippi's culture thinks about going green," he says. "And how clean energy and going green can play into economic growth (in the state)."