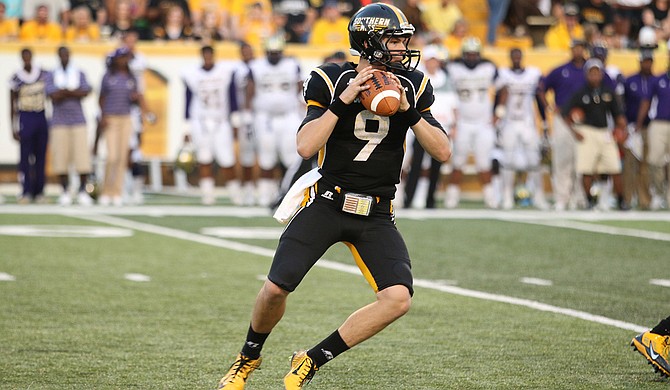 University of Southern Mississippi quarterback Nick Mullens could either help or hinder his team this season, which will affect his Conerly Trophy standings. Photo courtesy USM Athletics

Each year, the best college football player at a four-year college or university in the state of Mississippi receives the Conerly Trophy. And every year, I try to look at who might take home the hardware before the season starts.

Typically, the award goes to a quarterback or running back. A few defensive players have won the trophy, and once a guard, Gabe Jackson, was the outside-the-box pick. Offensive players always have the best chance to win because they are typically more likely to be noticed.

As the spread offense becomes the choice of more and more teams, quarterbacks are going to get nominated and win the award. Surprisingly, a wide receiver has never won this trophy.

Here are the players who I think have a shot at the Conerly Trophy this season.

When it comes to Mississippi State University, there is really only one main pick. Quarterback Dak Prescott took home the award last season, and he's the favorite to win the award again in his senior year.

Prescott threw for 3,449 yards and completed 61.6 percent of his passes. He threw for 27 touchdowns with just 11 interceptions. While leading the Bulldogs to the No. 1 ranking in the country, Prescott did it all. He ran for 986 yards, or an average of 4.7 yards per carry, with 14 touchdowns. The Heisman candidate even caught two passes for 35 yards and a touchdown.

Another hopeful for the Bulldogs would be junior defensive star Chris Jones. He will be asked to provide leadership and make big plays this season.

If there was one school with three or more Conerly hopefuls, it's the University of Mississippi. The Rebels have players on both sides of the ball that could win the award.

The starting quarterback could be Ryan Buchanan, who played just a handful of snaps last season, or Chad Kelly, who just transferred in from East Mississippi Community College. Both could end up playing, giving neither the chance to win the award.

Then, you have receiver Laquon Treadwell who caught 48 passes for 632 yards and five touchdowns in just nine games before a broken leg stopped him.

Finally, the Nkemdiche brothers could be in the mix for the Conerly. Robert has a chance to be a major star on the defensive line, and his brother Denzel is one of the best linebackers returning this season in the SEC.

Last season was a down year for Jackson State University, but the Tigers found a strong starter at quarterback. LaMontiez Ivy finally stayed healthy and had a chance at a break-out year as the starter all season.

Ivy threw for 3,209 yards and completed 64 percent of his passes with 22 touchdowns and 14 interceptions.

The quarterback also became the fourth leading rusher on the team with 188 yards and three touchdowns. If Jackson State manages to win the SWAC East and play in the championship game, Ivy will be the main reason for their return to top.

If a receiver is going to win the award, the Tigers' Dan Williams will have a great chance if he performs even better than last season. Williams caught 73 passes for 1,004 yards with nine touchdowns and averaged 83.7 yards per game.

One of the best seasons from a Mississippi player might have gone overlooked if you didn't follow SWAC football closely. In the mania of MSU and the University of Mississippi's run to the top of the college football polls, John Gibbs Jr. put together one heck of a year.

The Alcorn State quarterback not only led the Braves to a SWAC East title and a SWAC Championship but was also named Co-Offensive MVP of the conference. Gibbs threw for 2,482 yards with 21 touchdowns and seven interceptions while completing 58.3 percent of his passes.

Gibbs was a dual threat. He ran for 1,006 yards with 11 touchdowns and averaged 7.5 yards per carry. The Braves' passer not only averaged 77 yards per game, but he also led the team in rushing, as well. Gibbs even caught one pass for five yards, which proves he can do it all.

Things haven't been pretty on the field for the University of Southern Mississippi lately. The Golden Eagles have gone from the penthouse to the outhouse rather quickly. If things are going to turn around for the team, it'll need a better leader on the field. That is where Golden Eagles quarterback Nick Mullens comes in.

Last season, he threw for 2,470 yards in just 10 games. He passed for 12 touchdowns but threw nine interceptions and completed just 59.7 percent of his passes. Mullens will never be known for his running skills. The USM quarterback ran for 140 yards on 49 carries and no touchdowns.

If he isn't the starting quarterback this season, that position could go to Texas Christian University transfer Tyler Matthews. Again, if Matthews can resurrect Golden Eagle football, you have to put him on the short list to win the Conerly Trophy.

The Statesmen made a run all the way to the Division II playoffs last season, and their signal caller, Tyler Sullivan, was a big reason for Delta State University's offensive strength.

While Delta State led the conference in offense, Sullivan passed for 3,358 yards with 27 touchdowns with 15 interceptions. He didn't rack up a lot of yards on the ground with just 208 yards on 73 carriers, but he did rush for seven touchdowns. If the Statesmen are going to make another playoff run, Sullivan will be leading the way.

While these might be the hopefuls in my mind, another player could always come out of nowhere to win the Conerly Trophy, creating a new star for Mississippi football fans. That is one of the fun parts of watching the season play out.