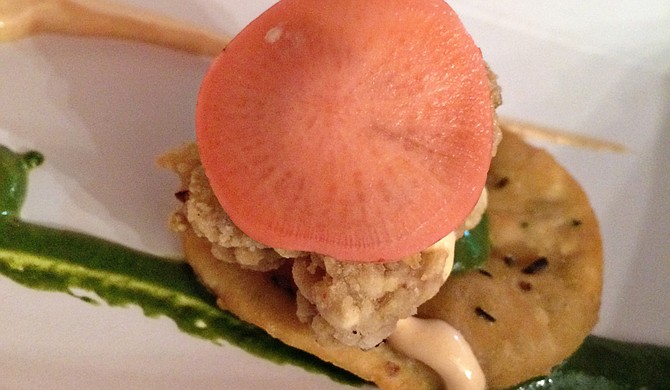 Mache (spinach purée), a fried oyster, sesame crema and a scallion pancake made up the amuse boucle at the pop-up Stäge dinner. Photo by Amber Helsel.

At Brent's Drugs on the night of Nov. 7, a chandelier hung on the ledge of the mirror on the restaurant's back wall, the light reflecting off the glass.

It was the first thing many people noticed as they trickled in to the Jackson staple, some going to The Apothecary in the back and some attending Tom Ramsey's "Stäge" pop-up dinner, which he has been doing since October.

When Ramsey chose not to renew the lease for his downtown restaurant, La Finestra, in October, he decided to take his next step in the culinary world.

"(La Finestra) had a great two-year run, but all things must change," Ramsey told the Jackson Free Press in October. "I've enjoyed the support of the community and my customers, but it's time for me to take it easy for a while and see what I want to do next."

The next step turned out to be continuing Stäge, but instead of just staying in Jackson, he wants to take his pop-up dinner across the United States, with the first few stops in Atlanta, New Orleans and Baton Rouge, La.

"I love pop-ups because running a fine-dining restaurant is a really hard job, especially in a small space," Ramsey told the JFP. "I really love mingling and getting to know my guests, but I don't like the everyday grind. Pop-ups let me entertain people and get paid for it without the grind of it."

Stäge's tagline is "celebrate the now, reject permanence," and in a way, the chandelier Ramsey will take with him to all events symbolizes that. Instead of being made of fragile glass, it is comprised of durable plastic and even folds up so he can travel with it.

The soup course was mache (spinach purée), a fried oyster, sesame crema and a scallion pancake.

For the Nov. 7 event at Brent's, Ramsey focused his dishes on New Orleans dishes that have an Asian flair.

For the amuse bouche, he served New Orleans-Vietnamese fusion in the form of a fried oyster, mache (spinach puree) and a sesame crema on a scallion pancake. It was a play on oysters Rockefeller. Instead of the shell, the dish had the Vietnamese pancake.

For the soup, Ramsey served yaka mein, a New Orleans street-food soup usually served outside of bars. It's also called "Old Sober" because it's thought to be a hangover cure.

While the origins of the dish are unclear, many believe that it was Chinese workers introduced it when they relocated to the city from south Louisiana plantations.

Chinese immigrants came to Louisiana in the mid-1800s to work the railroads and sugar plantations. When they found the work unsuitable, the Chinese population relocated to South Liberty near the Chinese Mission. Eventually, they created New Orleans' own Chinatown, though most would ultimately relocate to the suburbs.

Instead of the standard beef broth, Ramsey made one out of pork trotter and turkey necks, and added collard greens and pork belly to the soup. He served it in a Styrofoam cup reminiscent of the yaka mein you might find at New Orleans street vendors late at night.

For the fish course, Ramsey served a mirliton, which is a pear-shaped vegetable, with shrimp and a cream-based sauce made with Herbsaint, an anise-flavored liquor produced by Sazerac Company and originally made in New Orleans.

The fowl course was a chicken clemenceau ravioli.

The best dish of the night, for me, was the "Fat Harry's" chili-cheese fries. Fat Harry's is a go-to college bar in New Orleans.

These weren't standard chili-cheese fries. For the potato part, Ramsey served fried whipped potatoes with chili, flank steak and Wisconsin cheddar. It was like eating a combination of chili-cheese fries and mashed potatoes, and it tasted like the best comfort food in the world.

For dessert, Ramsey served calas and bread pudding, which was an excellent ending for the dinner. The dish was a fried dumpling with rice pudding on the inside, powdered sugar over the top and a rum-based sauce.

Most of the guests didn't eat food on dishes or drink their drinks in glasses, though some did (it was BYOWG, bring-your-own-wine-glass). Ramsey served the courses on black paper boats, and each table had a roll of paper towels to go around. Though the food was elevated, the atmosphere was casual. Ramsey and his team encouraged guests to sit with people they didn't know.

"If you're sitting with someone you know, you're doing it wrong," they said. All through the night, chatter interchanged with silence as guests savored their food.

The next Stäge pop-up event is Dec. 5 at Brent's Drugs (655 Duling Ave., 601-366-3427). It will feature modern interpretations of steakhouse classics. For more information, visit stagepopup.com.