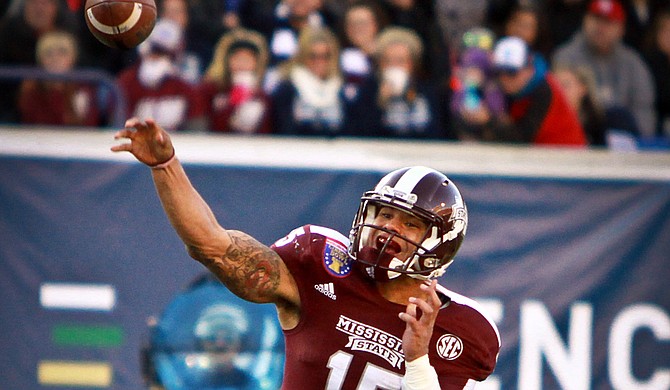 Prescott is, without question, one of the greatest football players in Mississippi State history. He and Head Coach Dan Mullen took the Bulldogs program to heights never seen before, such as the No. 1 ranking in all of college football during the last season.

The Louisiana native already owns all 23 passing records at MSU (11 season records and 12 career records), as he now sets his gaze on the SEC record books. He is the only player from either UM or Mississippi State who has earned 100 career touchdowns. He places sixth in the conference in that statistic, putting him on a list with the likes of Tim Tebow, Aaron Murray, Danny Wuerffel, Peyton Manning and Chris Leak.

This season, Prescott already became the third SEC quarterback to have 50 passing and 30 rushing touchdowns. He joins a group that includes Heisman Trophy winners Johnny Manziel and Tebow.

Currently, Prescott has 10,285 total yards, and if he averages 300 total yards (rushing and passing) per game in the next few weeks, he can rise as high as third place in conference history behind Murray and Tebow, which would put him in elite SEC company.

As he climbs the record books, Prescott will have a chance to enter the Heisman discussion again. His best chance at earning the accolade would be to upset Alabama this weekend. When the Bulldogs take on the Crimson Tide in Starkville on Saturday, Nov. 14, he will have the nation's eyes on him at the 2:30 p.m. kickoff.

But upsetting the Crimson Tide will take a mix of top-notch technique and a bit of luck. It took five turnovers for UM to manage that, and the Tide ran over Louisiana State University to take control of the SEC West. If MSU wins out, the Bulldogs will likely end the season 10-2, and Prescott would be the major reason for a second year of 10 wins for this program. He would also probably be on the mind of Heisman voters after finishing eighth in voting last year.

Fans can anticipate plenty of discussion about how Prescott's game will fit in at the NFL level next April, but that is another article for another day. Right now, I just want to enjoy what Prescott is doing. It is rare to see a college football player mean so much to a program during his career. Prescott reminds me of Tebow because of how much he does for the MSU offense.

It is time to soak in his greatness. Next season, we will miss him.

When the U.S. defeated England in the 1950 World Cup, many newspapers believed the 1-0 score was a typo. They reported that England won 10-0.