A Jill of All Trades | Jackson Free Press | Jackson, MS

A Jill of All Trades 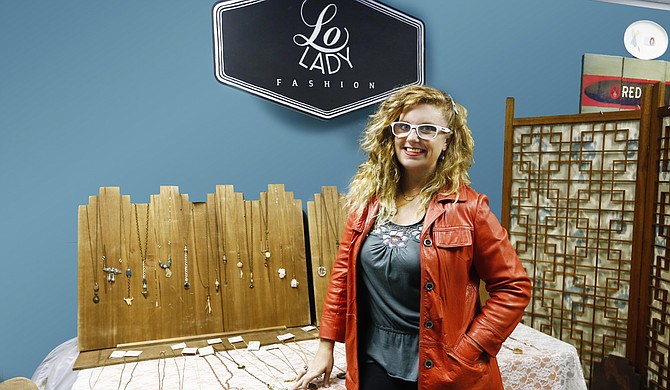 Lauren Miltner calls herself a "jack of all trades, master of none."

Her Lo Lady Fashion studio, which is on the second floor of Fondren Corner, has wooden displays that feature an array of her custom jewelry: necklaces with pendant designs such as silver triangles, geometric shapes and small feathers made of mixed metals; ones with found objects such as lockets and charms and hand-done beading work; and pieces with gemstones and minerals. A mid-century-modern room divider technically separates her display space from her workspace. She keeps most of her jewelry supplies in clear containers on either side of her studio, so she has inspiration all around.

"Because I am a visual person, I get my inspiration by seeing certain things in front of me, and then I piece them together," she said. "I try to keep half of it organized so people can come shop by appointment, but then the other side is kind of creative chaos."

To create her jewelry, she finds a focal piece and creates around it. For her vintage designs, the process starts in thrift stores. She'll see an item and then have a vision of what she wants it to look like.

The jewelry came out of her need to find pieces that matches her style, which can be anything from '50s to modern.

The business originally started with her mother, Patti Igoe, who, along with making pancake mixes for her business, MsPatticakes, is also an artist. They began making jewelry together almost two years ago, starting with what Miltner calls vintage-art pendants. They first took images, such as swallows, and Photoshopped them over backgrounds—vintage wallpaper or photos of things they liked—and sold them as prints. When Igoe discovered that those weren't selling, they began transitioning to jewelry, at first trying things such as Photoshopping animal heads onto human bodies.

"It didn't get a whole lot of attention from either one of us (at first)," Miltner told the crowd at 1 Million Cups on Oct. 28. She was teaching improv and doing event design for Tulip Floral, and Igoe was traveling and training law firms across the country in information technology. "From there, I just started researching more and more jewelry tastes that I like because what I wear, I can't find," Miltner said.

After seeing Miltner's pieces, Igoe donated her chains, connectors and other jewelry-making supplies to her daughter, and let her take the reins.

"I could not make art fly," Igoe said in an interview. "Art on pendants just wouldn't fly. Then I started seeing Lauren's designs, and I fell in love."

Miltner, a native of Grand Rapids, Mich., studied marketing, journalism and psychology at Colorado Christian University and Davenport University in Grand Rapids. She moved to the Jackson area 11 years ago. She did visual merchandising for a department store and also taught at Drama Kids of Greater Jackson for three years. She began doing Lo Lady Fashion in 2013, but she decided to take the company full time in November 2014 when she was on bed rest after rotator-cuff surgery. She also helps run Tulip Floral and volunteers and sings at Fondren Church.

While Lo Lady Fashion has had its ups and downs for Miltner, she says she is grateful that she doesn't have to earn her living in a typical office environment.

"It's just a really huge blessing that I'm not stuck at a desk somewhere, answering somebody else's phone," she said. "I pretty much do anything to avoid that like the plague, which can be stressful, but at the same time, it allows me the flexibility to get to really involved in my son (Kayden's) life and be the mom that gets to go to the fall festivals and field trips and that kind of stuff because I make my own schedule."

Along with her personally designed pieces, Miltner also does custom work. In the past, a grandmother asked her to create a piece for her granddaughter's wedding day that included wallpaper from the bride's nursery. Many other clients ask Miltner to make pieces based on mementos.

In the past few years, she has collaborated with a number of artists, such as Ginger Williams-Cook, with her vintage animal-human hybrid pieces, and Josh Hailey, and now she's collaborating with Drew Landon of art, clothing and design company Chlorophyll Effect. Some of Landon's creations include floral-patterned flat-bill hats with geometric designs and space-esque bucket hats, so those aesthetics have crossed over to Miltner and Landon's new set of jewelry pieces, which they will release this winter.

Miltner and local artist Kelly Grantham are also working together to make art pendants based on Grantham's work. Miltner will show pieces at Priced to Move, which is Dec. 11 and 12 at the Russell C. Davis Planetarium (201 E. Pascagoula St., 601-960-1550).