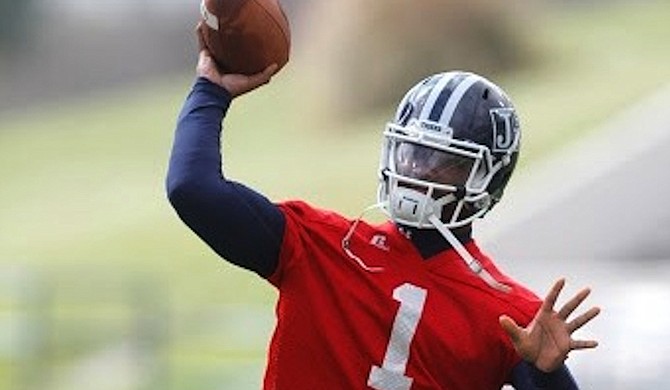 About a quarter of the college football season is left, and most teams are down to their final few games as this week's prepare to kickoff.

Near the end of this month, the finalists for the Conerly Trophy will be announced. Each of the four-year colleges and universities in the state will select one player, and then media representatives will help select the winner. After voting, the winner will be revealed around late November or early December. This means that the players have few chances left to impress voters. Here are the players I will be watching as the season comes down the stretch.

My current leader is Nick Mullens, the University of Southern Mississippi quarterback and one of the biggest reasons for USM's return to winning. And his stats for this season aren't bad either. He has thrown for 2,890 yards with 25 touchdowns and seven interceptions. Mullens has spread the ball around with five receivers recording more than 200 yards total receiving so far this season. He is also completing 64.1 percent of his passes and averaging 321 passing yards per game.

Close behind Mullens is Laquon Treadwell, University of Mississippi wide receiver. The Rebels have plenty of stars, but Treadwell is the heart and soul of the team, and as he goes, so goes UM. This season, Treadwell has 870 receiving yards on 61 catches with six touchdowns. He is also two for two in passing this season for 89 yards and a touchdown. In my mind, not many other players mean more to their team than Treadwell. His recovery after last year's broken leg has been nothing short of remarkable, as well.

Returning Conerly winner Mississippi State University quarterback Dak Prescott sits closely behind my top two choices. He currently leads the Bulldogs in passing and rushing, and will likely end the season that way. Prescott has completed 66.5 percent of his passes while throwing for 2,048 yards with 14 touchdown passes and just one interception. He has also rushed 371 yards on 72 carries with seven touchdowns.

The final player on my list has dealt with a lot of off-the-field distractions not of his making this season. LaMontiez Ivy, Jackson State University quarterback, has played well, even after Head Coach Harold Jackson was fired during the team's bye week this season.

Ivy has thrown for 2,187 yards with 15 touchdowns and eight interceptions while completing 62.4 percent of his passes. He has added another 178 rushing yards, making him second on the team, with two touchdowns. Ivy won't be able to lead his team to the SWAC Championship Game because the Tigers are at 3-3 in conference play, but he has played a big part in helping JSU get off the mat after starting the season 1-5. The team recently won two straight games and is at 3-5.

Feel free to tweet @JFPSports who you think are your top Conerly Finalists. I will retweet and discuss any Conerly favorites you might have this season.

SPORTS FACTS OF THE WEEK

The Buffalo Bills haven't made the playoffs since Bill Clinton was president.

Only 10 quarterbacks in NFL history have thrown half as many touchdown passes as Peyton Manning.