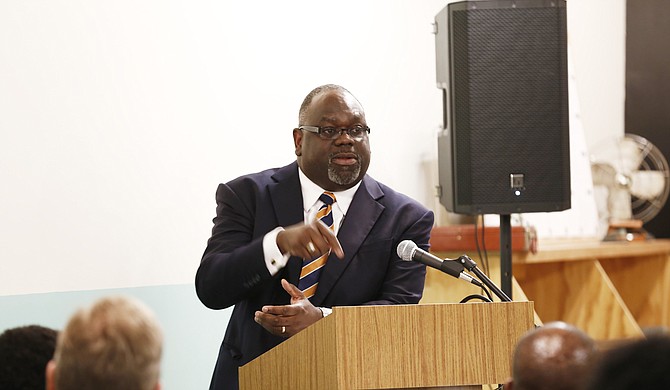 U.S. District Judge Carlton Reeves heard arguments in April in a case over a federal consent decree at Walnut Grove, which a private prison company manages on behalf of the Mississippi Department of Corrections. Photo by Imani Khayyam.

There is no question, a federal judge writes, that "there are current and ongoing violations of the inmates’ federal rights" at Walnut Grove Correctional Facility.

U.S. District Judge Carlton Reeves heard arguments in April in a case over a federal consent decree at Walnut Grove, which a private prison company manages on behalf of the Mississippi Department of Corrections.

MDOC asked the court to lift oversight imposed as part of a 2010 lawsuit over prison conditions, which resulted in a settlement that required MDOC to improve conditions and reduce violence at the facility. The consent decree also required periodic monitoring from an independent reviewer.

The state's corrections agency argued that Walnut Grove has since cleaned up its act. "It's not the same facility I found when I arrived," Lepher Jenkins, who took over as warden at Walnut Grove after a July 2014 uprising that sent a number of prisoners to the hospital, testified during the hearing.

Attorneys for prisoners, from the ACLU National Prison Project and the Southern Poverty Law Center, said the conditions that first brought the lawsuit persist to this day and that the court-ordered monitoring should remain in effect.

During the hearing, two prisoners testified about what they called unsafe conditions at Walnut Grove and the mistreatment of inmates by MDOC officials. This treatment continued during their time in custody at the Central Mississippi Correctional Facility in early April, when plaintiffs argued their case. The defendant, MDOC, put on its case three weeks later.

Judge Reeves, in his ruling, agreed with the plaintiffs.

"The protection of prisoner rights greatly impacts prisoners, the prison staff in charge of overseeing the prison facility, and even those who may visit the facility. And we cannot overlook the impact the treatment of prisoners has on the rest of society," Reeves wrote.

"We know that most prisoners do not die in prison; they serve their sentences and are subsequently released. How they are treated while in prison affects how they will reintegrate into society upon their release. As such, public confidence in our criminal justice and public safety systems is vital."

Management & Training Corp., which manages the prison, said in a statement that MDOC has addressed issues raised in the consent decree, including removing children and seriously mentally ill prisoners. MTC also said the facility is safe, secure, and clean and accredited by the American Correctional Association. In addition, the prison has eliminated long-term segregation and high-security-risk prisoners.

Margaret Winter, associate director of the ACLU’s National Prison Project, said the ruling shows that MDOC has not lived up to its responsibility.

“The department can no longer sit back and let a for-profit prison company neglect the prisoners’ safety on the state’s dime. We will make sure that this historic judgment is enforced, and we hope its impact will be felt not only at Walnut Grove but at prisons throughout the state," Winter said.

Jody Owens, managing attorney for the SPLC’s Mississippi office in Jackson called it "an important ruling for all current and future prisoners held inside the privately operated facility."