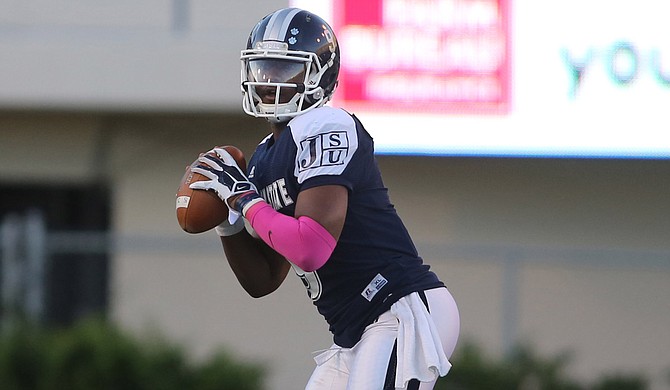 This season, if the Tigers are going to climb back on top of the SWAC, a big reason will be quarterback LaMontiez Ivy's play. The highly recruited quarterback finally got his chance to shine on the field.

Ivy came to Jackson State after a solid career at East St. Louis High School in East St. Louis, Ill. In 2011, Rivals.com considered him a three-star recruit. As a senior, he threw for 1,836 yards with 15 touchdowns and just three interceptions and rushed 349 yards while adding six rushing touchdowns.

Ivy spent JSU's 2012 season as a redshirt; he didn't play. He had a chance to be the starter in the 2013 season, but he didn't make it past the opening game. In the third quarter against Tulane University, Ivy went down with a leg injury that ended his season.

Ivy showed a flair for dramatic late-game magic in his first start of last season against Florida A&M University. The redshirt sophomore threw a game-winning 49-yard touchdown pass to DeSean McKenzie with one second left for the 22-17 win. Against Florida A&M, Ivy threw for 269 yards with one touchdown and one interception. Jackson State had little trouble the next week against Virginia University of Lynchburg as he threw for 246 yards with three touchdowns and one interception.

The quarterback and the rest of the team struggled against Tennessee State University and Grambling State University, as both games were losses. For the most part, Ivy put up modest numbers after the two-game winning streak that opened the season.

But things started to come together for him against Southern University. The quarterback threw for 428 yards on 32 of 48 passes with three touchdowns and no interceptions, but JSU lost the game 42-28.

He followed up the Southern game with 349 yards, making two touchdowns and two interceptions against Alabama A&M University. The Tigers fell 25-14 to the Bulldogs despite the game from Ivy.

He found the late-game magic again in the final two games of the season. Ivy led the Tigers to the game-winning score against Texas Southern University with six minutes left in a 15-10 JSU win. He threw for 148 yards with one touchdown and one interception.

Against JSU's biggest rival, Alcorn State, Ivy once again pulled out some late-game magic as he passed for 376 yards with three touchdowns and two interceptions. He led the Tigers to a 34-31 win when he threw for the game-winning touchdown with less than two minutes to play.

Jackson State finished the season 5-7 overall and 3-6 in SWAC play.

While there were struggles, the Illinois native showed signs that he could be a special single caller. He finished the season with 3,209 passing yards, making 22 touchdowns and 14 interceptions. Both passing yards and passing touchdowns were best in the SWAC last season.

On the ground, Ivy added 188 yards on 137 carriers for fourth on the team and added three rushing touchdowns. He finished with 3,397 combined yards, second in the SWAC, with 25 total touchdowns.

Even with the up-and-down season, Ivy completed 64 percent of his passes, also a SWAC best, as he connected on 270 out of 422 attempts. He was relatively injury-free, as he was able to start all 12 games and earn Second Team All-SWAC honors.

Recently, Ivy took part in the Manning Passing Academy to work with Mississippi's First Family of quarterbacks. Ivy will get the credit or blame for whatever happens this season on the football field for Jackson State, fair or not. The skills he gained at the Manning Passing Academy will help him be a better quarterback and lead the Tigers back to the top of the SWAC.