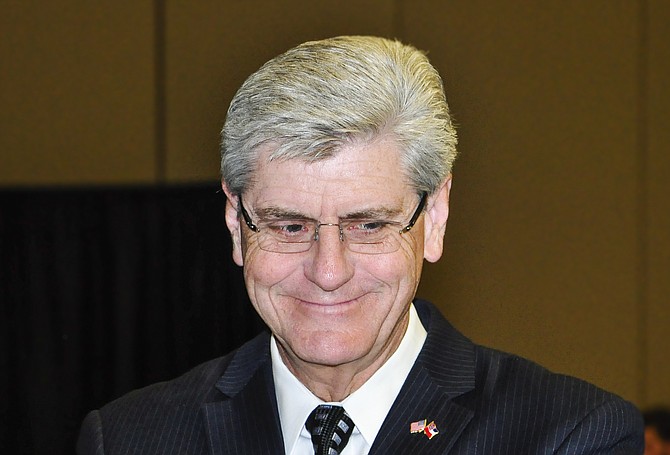 Gov. Phil Bryant helps lead the Legislature on issues like education, taxes and corruption in state agencies as it moves into the new session. Photo by Trip Burns.

Like a comet that is visible to Earth denizens only once in a while, the quadrennial event of the election-year legislative session has commenced.

Capitol observers predict a fairly humdrum 90-day-session (see "Legislators on a Tightrope," page 15), but that's not to say that legislative deliberations won't color election-year posturing, which has already started.

As expected, Republican Gov. Phil Bryant has said he would seek a second term as the state's top executive. Bryant, who is known as a tea-party governor for his stances on socially conservative issues such as abortion and same-sex marriage, appears to be attempting to broaden his appeal with a tax-cut proposal for workers in times of economic abundance.

Bryant is throwing red meat to the slash-and-burn fiscal conservatives by proposing tax breaks that, while small, would give a $921-a-year tax credit to a family of four with a household income of $52,000 and a $75 credit to a single person with an income of $14,590.

While the Republican gubernatorial contest will likely not see many surprises, a big question mark hangs over who will represent the Democratic Party on next November's ballot, which will also feature a ballot initiative about public-education funding, an important issue to Democrats' base.

Because the Legislature is not likely to fund education "adequately" as outlined in MAEP, the public-school advocacy group Better Schools Better Jobs has proposed an amendment for the November ballot that will change the state constitution to require the Legislature to provide an "adequate" and free education for Mississippi schoolchildren. The Legislature has the option to add an additional amendment on the ballot for funding education, but public-school advocates believe the reason they would do this is to confuse voters.

Brandon Presley, a Democrat who serves as Northern District commissioner on the Mississippi Service Commission, recently announced that he would run for another term on the PSC. Presley, whose name had been floating around as a possible Democratic challenger to Bryant, could have given the governor a run for his money given Presley's populist appeal and name recognition (he is a cousin of rock legend Elvis Presley).

With Attorney General Jim Hood, a Democrat, also deciding to stay put for at least another term, the Democratic gubernatorial nomination could turn into a free-for-all.

In other political announcement news, Mitch Tyner, who proved to be an interesting character in the Republican U.S. Senate primary saga as State Sen. Chris McDaniel's lawyer, and Democratic lawmaker Cecil Brown will both run for the open seat on the Mississippi Public Service Commission, which regulates utility companies in the state. The current commissioner, Lynn Posey has declined to seek reelection.

Because of changes made during the last round of redistricting, Brown would have to face off against Republican Rep. Bill Denny, who chairs the House committee that oversees reapportionment, which creates a opportunity for a young, ambitious Democrat from north Jackson.

Also, on Dec. 26, Sanford Johnson—who is deputy advocacy director for Jackson-based Mississippi First—announced that he would run as a Democrat in District 26 to succeed state Rep. Chuck Espy, D-Clarksdale, who is not seeking re-election. Johnson lives in Clarksdale, but is often in Jackson working at the Capitol on education-policy issues. A Starkville native, Johnson launched a website to raise $20,000 for his war chest.

Joel Bomgar, a technology entrepreneur who founded the multi-million dollar Bomgar Corp., declared his candidacy for the Republican primary in Mississippi House of Representatives District 58, the seat of retiring Republican Rita Martinson. Senate Republicans nominated retiring Sen. Giles Ward as Senate president pro tempore, which is likely a political calculation on the part of Lt. Gov. Tate Reeves, who has to hold various competing factions together in his Senate this year.

The top issues facing prospective candidates include the never-ceasing debate over funding of the Mississippi Adequate Education Program, Bryant's tax cut proposal and reforms at the Mississippi Department of Corrections.