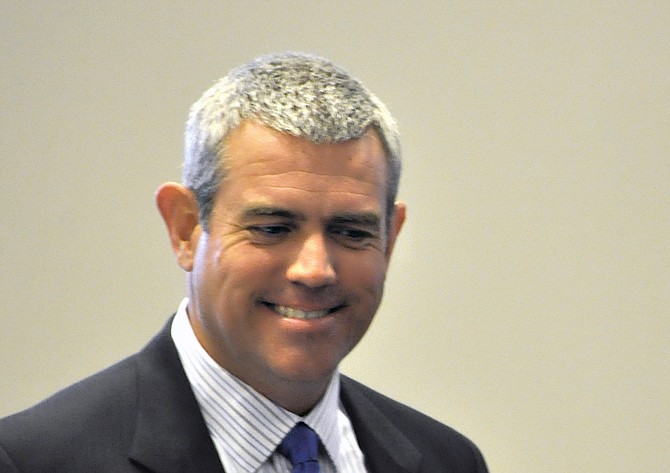 Speaker Philip Gunn presided over a testy debate in the House Jan. 13 in which Democrats accused members of the Legislature of shady behavior. Photo by Trip Burns.

The Mississippi Legislature voted last week to place an alternative to a citizen-driven initiative on the ballot this fall for the first time in Mississippi history under the state's initiative-process law.

The "people's initiative"—the one that received around 200,000 signatures from Mississippi citizens and would amend the state constitution to compel the Legislature to adequately fund public education—will now appear on the November ballot alongside the Legislature's new option.

House Concurrent Resolution 9, which passed the House 64-57 on Jan. 13 and the Senate 30-20 the next day, received a virtually straight party-line vote in both chambers.

The Mississippi state law regarding the initiative process allows legislators to draft an alternative to any statewide ballot referendum, vote on it and place it on the ballot—an option that the state has never used.

In this case, public-school advocates worked for months to gather 200,000 signatures—the secretary of state certified almost 122,000 of them—to amend the Mississippi constitution to compel the Legislature to fund education adequately.

"I look at it, personally, as an effort to actually weaken the amendment that's going to be on the ballot in November," Moak said. "When you look at the alternative, it looks simple. ... Under the alternative, the Legislature, of course, retains all discretion, and there's no mention of funding obligation so therefore, it makes 42 meaningless."

That measure, Initiative 42, would amend Section 201 of the Mississippi Constitution "to require that the State must provide and the Legislature must fund an adequate and efficient system of free public schools."

The alternative proposed amendment, if passed, would "require the Legislature to provide, by general law, for the establishment, maintenance and support of an effective system of free public schools."

The state leadership, mainly Speaker of the House Philip Gunn, however, may have something to do with the speedy passing of the House resolution that, if successful, would not pressure the Legislature to fully fund "adequate" public education.

"The language 'adequate' and 'efficient,' from my research, is basically a lawsuit hand grenade," said Rep. Greg Snowden, D-Meridian, who handled the bill in the House. "That phrase is the subject of much litigation."

Democrats at the Tuesday House hearing for the alternative initiative claimed, sarcastically or not, that the Legislature was voting on a resolution written over the weekend.

Democratic lawmakers characterized the act as a disingenuous ploy. Several of them in the House—including Moak and Rep. Steve Holland, D-Plantersville—claimed that Republicans were acting unethically in speeding up the legislative process. They even suggested that some of the Republican legislators had been coerced to vote for the resolution.

Like it had the previous day in the House, the Senate debate quickly grew testy Jan. 14. When Sen. David Blount, D-Jackson, asked Tollison to define "effective"—the word replacing "adequate" in the alternative initiative—Tollison told him, "Look it up on Webster's."

Initiative 42 includes language that would give authority to the chancery court to enforce the law in the case of a lawsuit. The alternative does not. However, Democrats argued that the current law allows for lawsuits just as the proposed Initiative 42 would and, under Mississippi law, the chancery court would handle them. "That is just where you go when you have a complaint against the state," said Patsy Brumfield, a Better Schools Better Jobs organizer who is promoting 42.

Both the original and alternative initiatives exclude language in the current constitution that tells the Legislature to support public schools "upon such conditions and limitations as the Legislature may prescribe."

Brumfield calls this the "if-you-feel-like-it clause"—it essentially allows the Legislature to ignore the law and continue to refuse to fully fund the Mississippi Adequate Education Program.

Tollison admitted that he believes the constitution should be amended to rid it of that language, which gives the Legislature full authority to do what it pleases.

"Truth be known, there is a provision in there that I think should be eliminated, and this alternative amendment eliminates it," Tollison said on the floor.

The ballot will likely include two sections now that the Legislature has placed an alternative proposed amendment on the November ballot.

One section will ask the voter if they wish to vote for either of the amendments, allowing the voter to respond either "yes" or "no." If the voter checks "yes" for the first section, the second section asks which amendment the voter prefers.

Tollison, a former pro-public education Democrat who switched parties, was unable to tell the Senate what the results would be in different voting scenarios, including if a voter checked "yes" in the first section and failed to specify which proposed amendment he or she wanted in the second section.

"If it can't be explained on the floor of the Senate, it's going to confuse voters at home," Blount said.

Brumfield said she will work to educate voters on how to vote for the original initiative on the ballot come November.

Another significant development for public education came Friday when the Mississippi Department of Education announced that the state is withdrawing from the testing consortium that develops assessments aligned to Common Core standards.

MDE announced that, on Feb. 2, the state Board of Education will issue an RFP for state assessments aligned to the standards starting in the 2015-2016 school year.

"The new RFP process will give the state the opportunity to seek competitive, multi-year bids," said Dr. John R. Kelly, chairman of the Board of Education, in an MDE statement. "Our exit from PARCC will help ensure the process is open and transparent."

The Mississippi Department of Education said it has contracted with NCS Pearson, Inc. to deliver the 2014-2015 PARCC assessment as a one-year emergency procurement. That will remain the statewide assessment for the 2014-2015 school year.

Read more about MAEP at jfp.ms/maep.

Legislators had to file all bills for consideration in the 2015 session by Monday, Jan 19, at midnight. Here are a few of the just over 900 bills recorded by Tuesday morning:

MAEP: House Bill 120 would require the state to fully fund the Mississippi Adequate Education Program for fiscal year 2016 and every year following.

SCHOOL CHOICE: House Bill 394 proposes creating the Equal Opportunity for Students with Special Needs Act, which would give parents of special needs children public funding to go to private schools or receive educational support like tutoring. Senate Bill 2263 would give state income tax deductions to students who send their children to private schools.

COMMON CORE: Senate Bill 2249 and 2161 both address ways to replace Common Core standards with another curriculum.

ABORTION: Senate Bill 2138 would require a woman to wait a minimum of 72 hours before obtaining an abortion.

CORRECTIONS: Senate Bill 2290 would prohibit offenders convicted of house burglary from participating in MDOC's early-release programs. House Bill 333 would create a task force to "address the disparity of African American males in the judicial system."

POLICE: House Bill 269 would make it legal to videotape law enforcement officers, firefighters and conservation officers while on duty, and House Bill 5 would require all law-enforcement agencies to record interrogations on video.

IMMIGRATION: House Bill 74 proposes the creation of a task force to study the impact that immigrants have on poverty in Mississippi.

THE BIBLE: House Bill 386 and Senate Bill 2179 would designate the Bible as the state book. Senate Bill 2140 would compel the state Board of Education to approve of a state-funded course on the Bible.

TRANSPARENCY: House Bill 290 would create civil penalties—a $25,000 fine—for disclosing information discussed in an executive session of public bodies, such as a city council or board of supervisors.