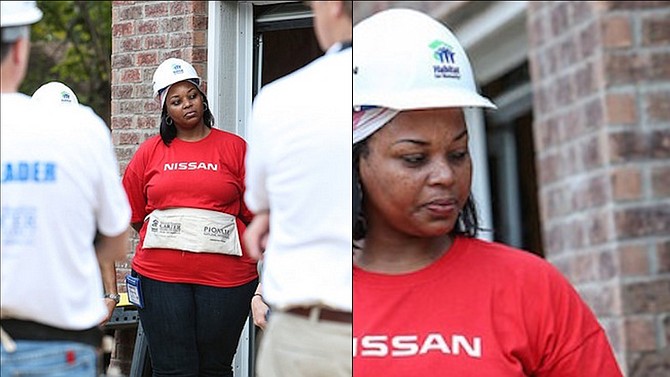 After participating in a Habitat for Humanity build in Dallas, Nissan employee Christina Doss plans to use her acquired skills and experience to help enrich her own community in the Jackson metro area.

Doss, of Nissan's Canton plant, was one of five Nissan North America employees that Habitat chose to participate in the week-long Jimmy & Rosalynn Carter Work Project in October, where Doss built homes for the Dallas-Fort Worth community.

For Doss, the project entailed rehabbing about 60 homes, which included painting, caulking, landscaping and renovating the interior.

"I learned that a lot of times you think you have to do a whole lot to make a difference in not just your life but somebody else's, (but) you really don't," Doss said. "I had never really done any type of construction. I painted and put up signs, just little things. Just that little part that I did actually contributed to making somebody else's life better and also gave me a sense of determination and a bigger desire to do what I can to help other people."

Doss was especially excited about meeting people from all over the country and "coming together for one goal, to build housing for people in need."

She was also able to meet former President Jimmy Carter, who has been building with Habitat for Humanity for 31 years, on her trip.

Doss, 42, has been working at Nissan, which partners with Habitat, since June 2003. She is currently taking classes online at Mississippi State University. She and her husband of 15 years live in Clinton with their 11-year-old daughter and 13-year-old son.

Doss is grateful for the opportunity her employer was able to provide her. "I plan on participating more in our area and the metro area in Habitat," Doss said.