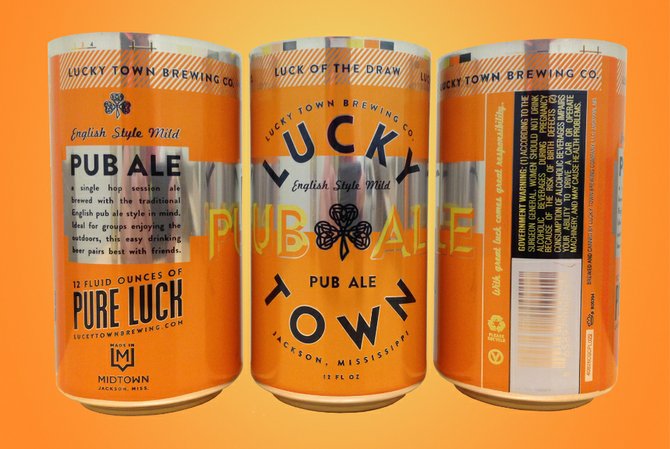 On Friday, Nov. 7, locally owned and operated craft microbrewery Lucky Town Brewing will open the doors to their new brewing facility in Jackson for a weekend-long grand-opening celebration.

On Friday, Nov. 7, locally owned and operated craft microbrewery Lucky Town Brewing will open the doors to their new brewing facility in Jackson for a weekend-long grand-opening celebration.

Lucky Town will provide brewery tours and tastings from 4 p.m. to 7 p.m. Visitors can sip their choice of Lucky Town beer while enjoying local live music and pair their favorite beer with food available for purchase on-site by local food trucks such as Lurny D's and Tito's Tacos. The celebration, beer, food and music will continue Saturday, Nov. 8, from 11 a.m. to 3 p.m.

The brewery's new brewing system will allow Lucky Town to add new styles to their lineup, and they will continue to provide their three year-round draft beers: a Belgian-style blonde ale named Ballistic Blonde, an English-style mild ale named Lucky Town Pub Ale and an oatmeal stout named Flare Incident. Ballistic Blonde and Pub Ale will also be available in cans at local grocery stores, convenience stores and other retailers beginning in November.

Following the grand-opening weekend, Lucky Town will offer brewery tours and tastings on Fridays from 4 p.m. to 7 p.m. and Saturdays from 1 p.m. to 4 p.m., with the second Saturday of each month including live music and food vendors on site.

"In order to enhance the desired community aspect, we're hosting a monthly event we call Sippin' Saturday, where we will invite all the locals and visitors to join us for food, music and of course, great local beer," Angela Blackburn, events director of Lucky Town Brewing, said in a release. "We will be teaming up with local chefs and musicians to spotlight all the great talent that Jackson and Mississippi has to offer."

Tours will begin at the top of each hour. Admission is $10 and includes a complimentary tasting glass and six beer samples. Lucky Town Brewing merchandise will also be available for purchase in the tasting room.

On Wednesday, Sept. 17, the University of Southern Mississippi held the official groundbreaking for Asbury Hall, the future home of USM's College of Nursing, the Mississippi Business Journal reported.

The $31-million, state-of-the-art facility on the western edge of the Hattiesburg campus is replacing an older facility that can no longer meet the current requirements of nursing education. Asbury Hall will increase the square footage dedicated to the College of Nursing by 135 percent, providing much more space for faculty and students. USM officials expect construction to be completed in 2016.

The USM Foundation began preparations to construct the new facility with an $8-million fundraising campaign for the nursing program in January 2012. The College of Nursing Building Campaign also received a $4-million commitment from the Asbury Foundation of Hattiesburg, which led to the naming of Asbury Hall. To date, the campaign has raised more than $6 million toward the original goal.

The new building will allow for an increase in nursing enrollment from the current 550 students to more than 800. The facility will also expand new programs in the College of Nursing through student interactive areas. In addition, Asbury Hall features an enlarged and enhanced clinical simulation lab, computer labs and classrooms that will promote the acquisition of knowledge in a positive and interactive learning environment.

Nissan Gives Donation and Volunteers for Habitat for Humanity

Including this donation, Nissan's support for Habitat for Humanity totals $11.6 million over the past nine years. Nissan began working with Habitat in the aftermath of hurricanes Katrina and Rita in 2005. Nissan donated 50 Nissan Titan trucks to assist Habitat's response efforts on the Gulf Coast and sent employees to assist in home building. Nissan employees have logged more than 70,000 volunteer hours with Habitat for Humanity and have helped build 60 homes across the United States since 2006.

In addition to working coast to coast with Habitat affiliates in Canada, Nissan employees will volunteer to support construction or revitalization projects in 11 cities across the U.S. this year. The company will also donate four Nissan NV commercial vehicles or Nissan Frontier trucks to Habitat affiliates that make commitments to sustainable construction practices.

Next month, five Nissan employees from the U.S. and Canada, including Christina Doss from Nissan's Canton Vehicle Assembly Plant, will join more than 4,000 Carter Work Project volunteers to help build or repair more than 100 homes in Dallas and Fort Worth, Texas as part of the seven-day 31st Jimmy & Rosalynn Carter Work Project from Oct. 5-11.