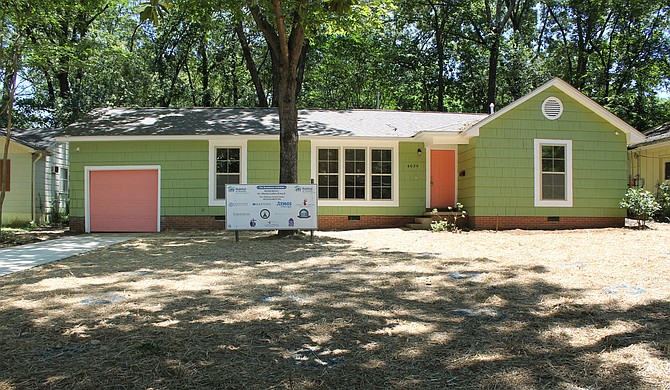 Habitat for Humanity Mississippi Capital Area recently finished its latest home as part of the five-year Broadmoor neighborhood revitalization initiative it launched in 2019, despite setbacks and obstacles to construction from the COVID-19 pandemic. Habitat completed construction on the new home, located on Casablanca Street in the historic Broadmoor neighborhood in north Jackson, on Tuesday, June 9, and held a house-blessing ceremony on Friday, June 12. The homeowner, Tahara Williams, moved in with her 3-year-old son Kingston.

The first homes in the Broadmoor neighborhood went up in the 1950s as housing for returning veterans after World War II. The deaths of original homeowners and the housing market crash of 2008 contributed to the neighborhood's decline.

Habitat for Humanity Mississippi Capital Area started work on the first two houses in the revitalization project in January 2019. Habitat is working on the revitalization as part of the City of Jackson's Blight Elimination Project. As part of the initiative, Habitat will demolish any houses the organization deems unfixable in order to rid the neighborhood of derelict buildings.

"When the pandemic hit we couldn't let volunteers work onsite, so our own Habitat staff stepped up to work on it, and it took much longer than normal," McKewen says. "However, even with so many of us out of the office from the pandemic, we still managed to complete a house that is affordable for someone in 75 days. It was also hard to get in touch with utility companies and get their staff to come out as well, but they came as soon as they could."

In addition to the recently finished build, auto company Nissan is also building a home in Broadmoor as part of the initiative, which Nissan employees are working to build. Another upcoming build is receiving funding from a Jackson family foundation that has asked to remain anonymous, McKewen says.

The Broadmoor revitalization will impact 100 houses in the neighborhood over five years, whether the organization rebuilds or demolishes them. Habitat is selling all of the revitalized homes in the Broadmoor neighborhood based on a 30-year, zero-interest mortgage for each owner.

For more information about the Broadmoor revitalization, or to become a volunteer or homeowner, call 601-353-6060 or visit habitatmca.org.

Malco Theatres began an initial round of reopenings for theater locations in Mississippi, Tennessee and Kentucky on Monday, June 15. All Malco locations have been closed since mid-March due to the Covid-19 pandemic.

In Mississippi, the Renaissance Cinema Grill in Ridgeland, Olive Branch Cinema Grill in Olive Branch, Desoto Cinema Grill in Southaven and the Tupelo Commons Cinema Grill in Tupelo are part of the initial reopening phase. Malco will schedule additional locations to gradually reopen each week through July 16, with the goal of having the full theater circuit operational by mid-July to coincide with the release of the Warner Bros. film "Tenet," a release from Malco says.

The Women’s Foundation of Mississippi, a public grantmaking foundation focused on improving conditions for women and girls across the state, recently released a second round of rapid response grants totaling $64,997 to seventeen Mississippi-based nonprofit agencies and programs serving vulnerable women and families during the COVID-19 crisis. WFM released the first fund of grants in early May.

For more information about the Women’s Foundation of Mississippi, visit womensfoundationms.org.