No Legislation Is Dead Until It’s Dead 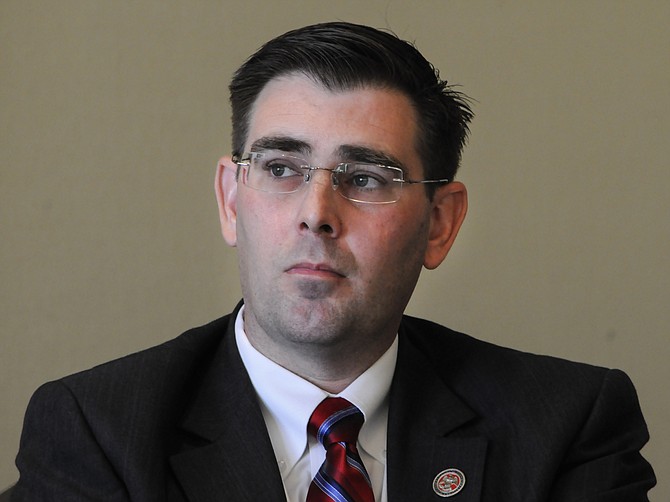 Rep. Andy Gipson, R-Braxton, House Judiciary B Committee chairman, must decide to either kill or let his committee vote on several bills before the Feb. 3 deadline. Photo by Trip Burns.

It's election year in Mississippi, and that means that state legislators will go for the controversial jugular if it might translate into votes back in the home district. And while committee chairmen may ultimately kill bills that would stir the pot, a torrent of eyebrow-raising legislation continues right up through one of the first major deadlines.

A so-called dangerous-dog bill, vaccine-exemption bills, and an effort to penalize teachers for engaging in political activity on school grounds have resulted in outrage on social media and in Capitol corridors.

All that energy might be wasted. If a bill does not pass its assigned committee by Tuesday, Feb. 3—the day this goes to press—it is ostensibly dead (although, as lawmakers are prone to say, no bill is dead until it's dead, dead, dead on the last day of the session).

While the death of some frivolous bills could allow for some productivity the rest of the session, lawmakers are likely to be frustrated if certain bills, on which they plan to build reelection campaigns, do not make it onto the floor.

In the meantime, anti-bullying bills, a police-body camera bill and a measure that would enhance sentencing for crimes committed against people based on their sexual orientation also hang in the balance.

Parents could receive vaccination exemptions for their child if the vaccine is against their personal beliefs under House Bill 130, introduced by Rep. Mark Formby, R-Picayune, and Senate Bill 2800, from Sen. Chris McDaniel, R-Ellisville.

Mississippi and West Virginia are the only two states in the nation that do not allow for vaccine exemptions based on either religious or philosophical reasons.

"We're not doing this blindly. Other states have similar exemptions," McDaniel told the Jackson Free Press

Members of Mississippi Parents for Vaccine Rights echo McDaniel's claims and say they want the choice to skip or delay some of the vaccines administered to their children.

The current schedule for immunizations for children, as recommended by the federal government, suggests that children should have 14 vaccines by the time they are 2 years old. But supporters of HB 130 and SB 2800 complain that some of the vaccines must be administered more than once, which amounts to 36 shots by 24 months.

But Dr. Joanna Storey, a pediatrician with Children's Medical Group in Jackson, said the exemption could put children in danger.

"Looking at other states where they have more permissive policies about parents choosing to opt out of vaccines for their school-aged children, there have been many outbreaks," Storey said.

She referenced the measles outbreak at Disneyland in California, where fewer children are vaccinated under their lenient exemption laws.

Some children cannot be vaccinated for medical reasons, and if fewer parents vaccinated their children due to personal reasons, they could be putting those children with medical exemptions at risk, she said.

McDaniel said those who oppose the bill are reacting to it "out of fear and not out of logic." He also said that states with similar exemptions haven't seen negative impacts from parents choosing not to vaccinate, although children in states with more lenient vaccination laws are at much greater risk of contracting preventable illnesses.

"The pushback is natural because it does change an existing mechanism," McDaniel said in the interview.

Storey said Mississippians are lucky to live in a state with strong vaccination laws, "because it means our children are protected from illnesses that can make them very sick and that are very preventable."

After a nearly year-long push from educators and advocates to change the state constitution to require the Legislature to adequately fund public education, House Education Committee Chairman Rep. John Moore, R-Brandon, has authored a bill that could hurt their efforts.

House Bill 449 would create penalties for any educational professional—teachers, principals or superintendents—who engage in "political activity" while on school grounds.

Shanel Kidd, who is on the Mississippi Educators Association board of directors, said the bill tells educators: "We don't want to hear what you have to say. We don't want to know what your concerns are."

In HB 449, political activity includes any efforts with the purpose of supporting a political party or position. It could also prohibit educators from emailing their legislator while at school.

Eubanks said the bill could penalize educators simply for talking about legislation, even that which affects schools, with their colleagues while at school.

The bill provides that violators will be fined $10,000 for their first offense and lose their professional license on second offense.

Kidd pointed out that $10,000 is nearly half of a beginning teacher's salary—which will rise to $34,390 due to this year's teacher pay raise. "There is no one who has more expertise about education than educators. So why wouldn't you come to the educators for more information to know exactly what it is that we need and how we need it to be done," Kidd said.

While threatening to silence educators, Republican lawmakers moved to change the state's academic standards and method of statewide testing on Jan. 29.

The House voted 116-3 on House Bill 385 to opt out of the Partnership for Assessment of Readiness for College and Careers testing, which the state board of education already chose to do on Jan. 16.

The Senate Education Committee took a bolder step on the same day when it passed Senate Bill 2161, which would effectively kill Common Core in the state.

Discrimination Against People And Dogs

House Bill 1261, by Rep. Larry Byrd, R-Petal, and Rep. Tommy Taylor, R-Boyle, would create criminal penalties for "dangerous dog" owners who do not keep their pet securely confined and restrained. In the bill's language, "dangerous dog" is defined as a pit bull.

Pit bull owners in Mississippi took to social media to oppose the legislation and show that their dog is not dangerous. The Majority Project, a campaign designed to reverse the stereotype that specific breads of dogs, like pit bulls, are inherently vicious animals, posted many pictures on its website of smiling Mississippians and their dogs.

Meanwhile, House Bill 534, introduced by Rep. Deborah Dixon, D-Raymond, adds enhanced sentencing for crimes committed against people because of their sexual orientation—something that does not already exist in Mississippi law.

Both bills have been referred to House Judiciary B Committee, chaired by Rep. Andy Gipson, R-Braxton. On Jan. 27, the Helping Overturn Wrongful Legislation (HOWL) Facebook page posted a video of Gipson, in which he acknowledged Mississippians' concerns with the pit-bull bill.

"It's clear that there is some fundamental issues with that bill," Gipson said.

"My intention is not to bring the bill out of committee."

While Dixon's bill would penalize people who commit hate crimes against the LGBT community, the Legislature is sitting on two other bills that could be potentially lifesaving.

House Bill 750 and Senate Bill 2474, authored by two Jackson Democrats, Rep. Alyce Clarke, and Sen. Sollie Norwood, strengthen the existing anti-bullying law to identify students who are often targeted by bullying based on their disability, appearance, sexual orientation, and gender identity and expression. In 2013, the Mississippi Department of Health Vital Statistics found that 635 youth ages 10 to 24 have committed suicide since 2000. Bullying is the most-cited cause in these cases.

In addition, Rep. Chuck Espy, D-Clarksdale, introduced House Bill 1279, which would require police officers to wear body cameras while on duty, in light of recent incidents of police brutality in Ferguson and around the country.