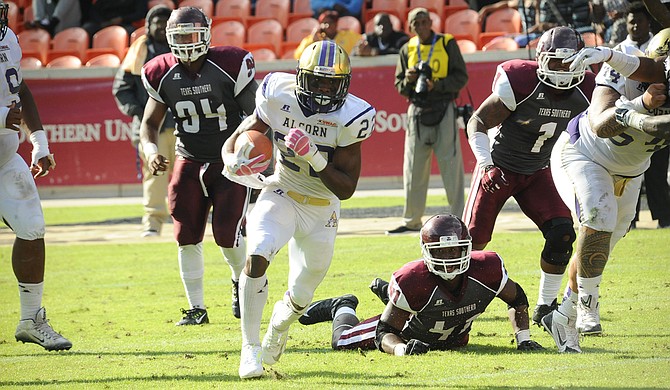 For SWAC champion Alcorn State University’s game against North Carolina A&T University in the Celebration Bowl, it has a few weapons, such as running back Darryan Ragsdale, at the ready. Photo courtesy Alcorn Athletics

The first-ever Celebration Bowl will feature this year's SWAC champion, the Alcorn State University Braves, against this year's MEAC champion, the North Carolina A&T University Aggies. This matchup of two historically black universities will provide national exposure for both conferences, as it is the first bowl game this season.

In a partnership with ESPN, the Celebration Bowl, at least in its first year, will be televised at 11 a.m. on ABC. Another college football game will not be on until 1 p.m. This is also one of two bowl games on a non-cable channel on Dec. 19, the other being the Las Vegas Bowl with University of Utah and Brigham Young University.

Alcorn State's defense will try to contain Aggies running back Tarik Cohen, the MEAC Offensive Player of the Year, who has 1,248 rushing yards and averages 113.5 yards per game. Cohen has rushed for 1,000 yards for three straight seasons and owns the school rushing mark for career yards.

Overall, the North Carolina A&T offense averages 305.6 yards per game and ranks No. 100 in the FCS. It is tied with the University of Northern Colorado for No. 36 in scoring offense with an average of 30 points per game.

The Braves are one of the best rushing offenses in the FCS. They rank No. 3 with 309 yards on the ground per game. Alcorn State has plenty of weapons to get the job done on the ground, including in running back Darryan Ragsdale.

The quarterback for Alcorn State is one of the questions heading into this game. The Braves started the season with quarterback John Gibbs Jr., but he was injured in a game on Halloween, and the spot went to Lenorris Footman. Footman has kept the Braves' offense motoring along, as he has been a balanced quarterback with 961 rushing yards and 962 passing yards. Footman's play has helped ASU finish No. 6 in scoring offense with 40.1 points per game.

The Braves are one of the top offenses in the FCS with a No. 11 current ranking in total offense, as they average 472.3 yards per game. An Alcorn State win in this game means the Braves win 10 games for back-to-back seasons.

The Celebration Bowl features two all-around good teams, which normally means the team who wins the turnover battle wins the game. In turnovers, North Carolina A&T is plus seven and Alcorn State is minus five. I'm going with my gut on this one: Braves 28, Aggies 24.

The famous World War I Christmas Truce football (soccer) game started when a British soldier kicked a ball into "No Man's Land," the territory between the British and German trenches.