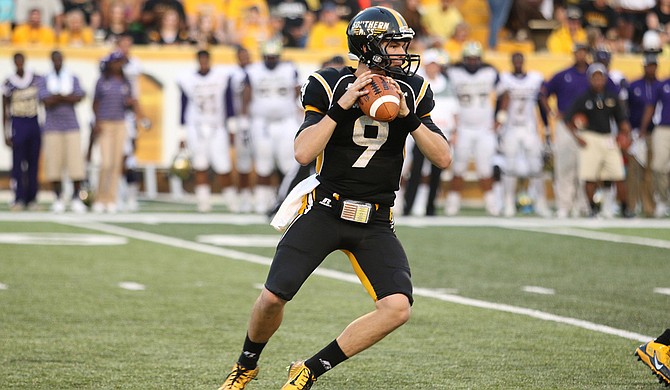 Before the beginning of this season, the University of Southern Mississippi needed two things to turn around a football program that had hit rock bottom: better offensive-line play to keep quarterback Nick Mullens up right and for Mullens to finally come into his own in his role.

It is safe to say that after a 9-3 regular season that includes a Conference USA West Division he finally blossomed. Even though Dak Prescott took home the Conerly Trophy earlier this week, it would be easy to make an argument that Mullens should have won the award.

In the preseason, many people speculated that he might not even start as quarterback for the Golden Eagles. They thought Texas Christian University transfer Tyler Matthews would take over Mullens' starting job.

Mullens won the job, and it is fitting that he has been the quarterback to lead USM back from the ashes after it crashed in 2012. This season marked his third as the starting quarterback. He joined the program after the winless season.

In high school, the Hoover, Ala. native was the Shelby County Player of the Year, Birmingham News All-Area Team, honorable mention Class 6A All-State team and quarterbacked in the 2012 Mississippi-Alabama All-Star Game. He led Spain Park High School to 10 wins and the Jaguars' first regional title in school history in his senior season of 2012, as he passed for 3,649 yards with 40 touchdowns and just seven interceptions. During his high school career, Mullens passed for 8,605 yards, which is seventh best in Alabama history.

Mullens was under center when Southern Miss broke the nation's longest losing streak at the time with a 62-27 win over the University of Alabama-Birmingham. In the game, he passed for a season high 370 yards with five passing touchdowns and a rushing touchdown.

He had struggles in 2013 during his true freshman season, as he passed for 1,776 yards with 13 touchdowns and 14 interceptions. He was named Conference USA All-Freshman and C-USA Commissioner's Academic Honor Roll.

Southern Miss improved on the field a little bit, and Mullens' play improved as well during his sophomore season. He passed for 2,470 yards with 12 touchdowns and nine interceptions. He started in 10 games during the 2014 season and missed two games due to injury.

His junior season was everything Southern Miss fans could have hoped for and more. Mullens passed for 3,964 yards with 35 touchdowns and nine interceptions as he finished second in the conference in passing.

The Golden Eagles and Mullens look to win the first C-USA title since 2011 when they meet Western Kentucky University in the conference title game. The game will be at the Hilltoppers' Houchens Industries-L.T. Smith Stadium and will be broadcasted on ESPN2 at 11 a.m. on Saturday, Dec. 6.