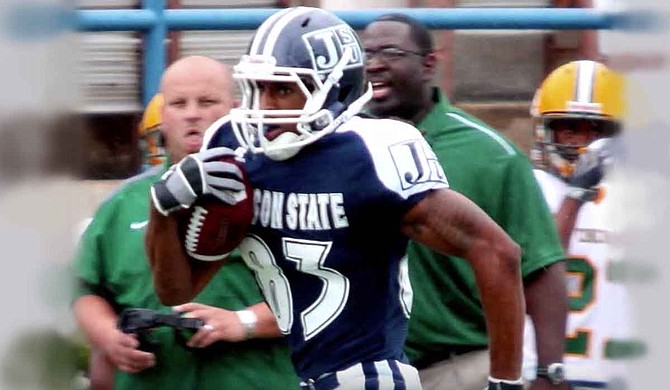 It has been 40 years since Jackson State University had one of the best drafts in Mississippi history. In the 1975 NFL Draft, the Tigers had two players in the top six picks: Walter Payton (fourth to the Chicago Bears) and Robert Brazile (sixth to the Houston Oilers). There were five JSU players taken overall in the 1975 draft, despite the fact that it only had 17 rounds.

Flash forward to 2015, and the Tigers haven't had a player drafted since 2008, when the Minnesota Vikings took Jaymer Johnson in the sixth round; however, one player from Jackson State is currently listed on an NFL roster: Rico Richardson for the Tennessee Titans.

Richardson was a standout at Natchez High School, where he became First Team All-Region and set a school record with 3,500 receiving yards. He added 442 rushing yards on 42 passes with six touchdowns during his senior season in 2008.

During high school, the Natchez native was also the 5A state champion in the triple jump with a mark of 46 feet and 11 inches, and he also played basketball.

During his freshman season at JSU, Richardson ranked second in the SWAC in punt returns with an average of 9.2 yards and was fourth on the team in receptions with 15 for 135 yards. The wide receiver made nine appearances in his opening college campaign.

Richardson improved during his sophomore season, playing in 11 games and finishing third on the team in catches with 538 yards and four touchdowns. He started 11 games during his junior season and finished with 37 receptions for 896 yards—a team high—and 11 touchdowns. The 6-feet 11-inch, 185-pound receiver had his best college season as a senior with 60 passes caught for 1,153 yards and 11 touchdowns.

Richardson finished his career at JSU with a total of 146 catches for 2,722 yards and 26 touchdowns, appearing in 43 games with 20 starts.

Even though Richardson ran an impressive 4.38 in the 40-yard dash and managed a 35-1/2-inch vertical jump and 10-feet-1-inch broad jump at the Super Regionals in Dallas, he went undrafted in 2013. The Kansas City Chiefs signed the former JSU star as an undrafted free agent.

Richardson went onto the team's practice squad after the Titans waived him in late August 2014 and spent most of his season inactive. In December of last year, the team activated him for his first game against the Jacksonville Jaguars, replacing Dexter McCluster, who was injured.

The former JSU product is battling Kendall Wright, Harry Douglas, Justin Hunter, Jacoby Ford, Hakeem Nicks and Dorial Green-Beckham, among others, for a roster spot. Titans receiver coach Shawn Jefferson said in an interview for TitansOnline.com that Richardson is "reliable, smart, and is as steady as they come. I am looking forward to him making plays in the preseason."

Tennessee head coach Ken Whisenhunt spoke about Richardson in a recent training-camp recap with the media. The head coach said, "It was obviously nice to see Rico Richardson make a play."

Richardson might not be a starting receiver, but if he can make plays when he gets the chance during the preseason, he could be on the active roster as a special teams player. There are just too many veterans and highly rated draft choices ahead of him to crack the starting lineup.

The former JSU star gets his first chance to shine in the 2015 NFL preseason against the Atlanta Falcons on Friday, Aug. 14, at 6 p.m., which will show on the NFL Network.