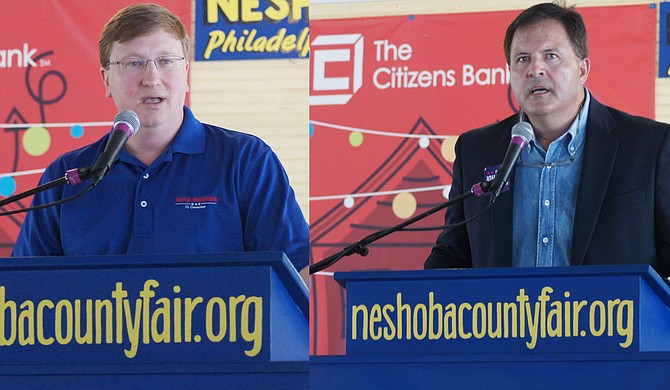 Education funding, job creation and fighting corruption are at the top of many Mississippi statewide candidates' lists heading into the November election.

Republican hopefuls are focusing on the positive gains and improvement they believe their leadership brought to the state in the past four years.

At the Neshoba County Fair, Lt. Gov. Tate Reeves said Mississippi was headed in the right direction with Republican leadership. House Speaker Philip Gunn, R-Clinton, agreed, and went on to say that Democrats have little influence in a Republican-controlled House. Both candidates easily won their primary races last week. Party lines have been starkly drawn for the upcoming election season.

"There is a bright line of distinction between the Republicans and the Democrats in the House of Representatives," Gunn said at the Neshoba County Fair.

Candidates in other state-wide races echo his sentiments.

Republican leaders focused on the GOP-led Legislature's ability to fund education higher than ever in the state's history, with no mention of Ballot Initiative 42 to force them to adequately fund education, or 42A, the alternative Republican version designed to draw votes away from 42. While higher revenue forecasts prompted lawmakers to increase MAEP funding from early budget drafts, the enacted budget still shorted MAEP around $200 million for fiscal-year 2016.

Incumbent Republican candidate Reeves said that under his and his party's leadership, the state is investing in what's important.

"Due to Republican leadership this year, Mississippi will spend $400 million more than was spent four years ago on public education," Reeves said.

Reeves also said the state will spend more on community colleges and universities than ever before.

Democratic lieutenant-governor candidate Tim Johnson said the state needs to invest more in education. He came out in support of Initiative 42 at the Neshoba County Fair, saying that fully funding education would be one of his top priorities if he is elected. Johnson also implied that only Democrats would implement the initiative even if voters approve it in November.

"If you vote for the current leadership, and you vote for Initiative 42, you're cutting off your nose to spite your face," he said.

Reeves said that in the past four years, more than 18,000 jobs have been created in the state, and he said other businesses are beginning to notice how attractive Mississippi is for dependable workers.

Democratic candidates promoted the Affordable Care Act and Medicaid expansion, not only due to the U.S. Supreme Court ruling that continues to allow funding to federally run state marketplaces, but also because of potential job creation.

Johnson said he plans to help expand Medicaid should he become lieutenant governor because of the federal funding it will bring to the state and the jobs.

"I want to extend Medicaid because of new jobs—it will create 20,000 new jobs," Johnson said. "To put it in perspective, that's three Nissan plants."

Another election to watch closely is the race for the attorney general's seat. Incumbent Jim Hood, the only Democrat currently holding statewide office, has held the post for 12 years. He is running for his fourth term, and at the Neshoba County Fair, Hood said one of the main reasons he believes he has been re-elected so many times is that he is cut out for the job.

"I know the crime and public corruption in Mississippi," Hurst said. "(But) it appears my opponent has sold the attorney general's office to Hollywood and has his office drafting subpoenas to go after Google."

Hood is leading the appeal of an order in the Google lawsuit, asking the 5th U.S. Circuit Court of Appeals to enforce a subpoena the state issued to Google to reveal its practices in sales involving prescription drugs, fake IDs and stolen credit-card data. He defended his involvement with the Google lawsuit.

"As an attorney general, you've got to hold these corporations accountable, and that's what I've done," he said.

Forty attorneys general in the U.S. filed an amicus curiae brief in support of the Mississippi-led appeal in July. Hood said that corporations and companies will pour their money into Mississippi during the election, including to his opponent, but he hopes voters remember his track record.

Hurst said he would fight back against the Obama administration and stand up for traditional "Mississippi values" if elected. Hurst said he would join the investigations into Planned Parenthood, and he said he has signed a petition to Congress to protect the tax-exempt status of churches. Hood has not joined either investigation.

"I want to be the attorney general for Mississippi, not for President Obama," Hurst said.

Hood said he has recovered $3 billion for taxpayers in his time as attorney general. Hurst said the attorney general's office should be doing more to investigate public corruption. Hurst was one of the lead prosecutors in the corruption scandal involving the former Department of Corrections Commissioner Christopher Epps and businessman and former Rankin County elected official Cecil McCrory.

Current State Auditor Stacey Pickering beat Mary Hawkins Butler for the Republican auditor candidate spot and will now face Democratic challenger Joce Pritchett in November. Pritchett, who did not have a primary challenger, said she is going to start talking more about why she is qualified to run for state auditor, as well as Pickering's record. Pritchett is a civil engineer and has practiced for 25 years.

"I have worked with a lot of contracts and agencies," she told the Jackson Free Press. "I know how contracts are supposed to be procured ethically and legally."

In his Neshoba County Fair speech, Pickering spoke about awards that his office has won during his two terms. He reminded voters how after Hurricane Katrina Mississippi managed to only have a half-percent fraud record instead of the higher numbers FEMA predicted.

Pickering said the General Accounting Office in Washington, D.C., called Mississippi a "role model for other states to follow when it came to managing, spending and being accountable for one-time federal dollars." Pickering said that, on his watch, the auditor's office is a national leader in managing taxpayer dollars.

Mississippi ranked sixth in the nation in a Center for Public Integrity 2012 survey of states for low corruption risk, and Pickering said Mississippi should be proud to be in the top 10. (The study also gives Mississippi a C+ grade, and Mississippi failed in the "political financing" category.)

Pickering's latest exceptions report came out at the end of last month. The auditor's office recovered $1.2 million last year. This number is lower than previous years. Pickering's office recovered $1.5 million in 2014 and $10.3 million in 2013. In his two terms as auditor, he has recovered a total of close to $24 million. Pickering vied for his track record, speaking in Neshoba County.

"This campaign and this race is all about who's qualified to serve as auditor of Mississippi," he said at the fair.

First-term Republican incumbent Tate Reeves defeated Alisha Nelson McElhenney. Tim Johnson of Madison, who served as a Republican state senator from 1996 to 2004 and switched to the Democratic Party this year to run for lieutenant governor, won against Jelani Barr, a Greenwood bookkeeper. Reeves and Johnson will also face the Reform Party's Rosa B. Williams.

Incumbent Democratic Attorney General Jim Hood and Mike Hurst, a Republican and former federal prosecutor, will face off in November.

Democrat Charles Graham competed in the race and will face incumbent Republican Delbert Hosemann and the Reform Party's Randy Walker.

Second-term Republican incumbent Stacey Pickering was challenged by longtime Madison Mayor Mary Hawkins Butler but held her off. Democrat Joce Pritchett was unopposed in the primary as was Lajena Walley of the Reform Party.

Second-term Republican incumbent Mike Chaney was unsuccessfully challenged by body shop owner John Mosley of Clinton. There is no Democratic challenger, but Chaney will compete against Johnny McLeod of the Reform Party.

— COMMISSIONER OF AGRICULTURE AND COMMERCE

Incumbent Republican Cindy Hyde-Smith and Democrat Addie Lee Green, who's served as an alderwoman in Bolton, were unopposed in their primaries and will face off in November. Reform Party candidate Cathy L. Toole is also on the ballot.

Mudslinging in the Auditor's Race

In keeping with the mood from before Aug. 4, one of the most combative up-ticket races was the Republican race between Madison Mayor Mary Hawkins Butler and incumbent Stacey Pickering. Even before the primary, the mudslinging had already started in the state auditor's contest.

Pickering targeted Butler by going after the only Democrat in the race, Joce Pritchett, for being an "LGBT candidate" in his campaign's automated calls.

Pritchett's campaign responded to the call on its website, saying: "This type of message is unacceptable in the 21st century. The Republicans know they can't attack Joce's qualifications, so they have to attack her orientation and her family. We can't let this happen."