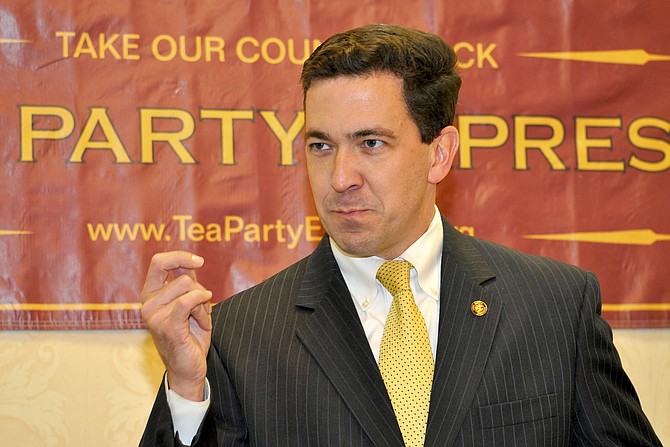 State Sen. Chris McDaniel, R-Ellisville, is the chairman of the UCF and chairs the Senate Elections Committee. In a news release announcing the proposed ballot initiative, McDaniel said the goal is to increase political participation and make holding elective office more accessible. Photo by Trip Burns.

A conservative political-action committee wants to limit how long some Mississippi officials can serve in office.

The United Conservatives Fund today said the group has filed documents with the secretary of state's office to start the process, which includes a state attorney general's review before the petitions can be printed and circulated around the state.

Keith Plunkett, director of policy and communication for the UCF, estimates the review process will take approximately 30 days. Plunkett added that the language is being fine-tuned, but that it would involve limiting legislators and statewide officeholders to two consecutive terms in the same office.

Currently, in Mississippi, the offices of governor and lieutenant governor are already limited to consecutive terms, but there are no limits on other statewide offices.

State Sen. Chris McDaniel, R-Ellisville, is the chairman of the UCF and chairs the Senate Elections Committee. In a news release announcing the proposed ballot initiative, McDaniel said the goal is to increase political participation and make holding elective office more accessible.

"The power of incumbency has built a wall between people and their representatives. This has caused an increase in cronyism, backroom deals and corruption. We believe regularly changing out officeholders is a step toward transcending those problems," McDaniel said in the release.

During his 2014 bid for the United States Senate against fellow Republican and incumbent Sen. Thad Cochran, McDaniel and his supporters often raised the specter of cronyism and potential corruption in Cochran's successful re-election.

Plunkett said the group is optimistic about the effort, which is loosely modeled on a 1999 ballot initiative. Known as Measure 9, it would have amended the state Constitution "to limit the number of consecutive terms a person can serve in the state Legislature to no more than two (2) terms in the House and two (2) terms in the Senate after the adoption of this amendment with terms being deemed consecutive unless separated by a full four (4) year term."

"I think the mindset and desire to see something happen is much stronger now than it was then," Plunkett told the Jackson Free Press of Measure 9, which failed with 55 percent of people voting against the initiative.

The term-limit push might meet another obstacle: the Legislature itself. In the past legislative session, after education advocates got enough signatures for a statewide ballot question about funding education—Initiative 42—lawmakers voted to include a so-called alternate proposed amendment. Opponents to that Republican-led move have decried the alternative proposal as confusing and designed to kill Initiative 42.

For the time being, Plunkett said the UCF won't worry about lawmakers just yet.

"I'm certainly not going to look into a crystal ball and predict what the Legislature (might) do," he said. "We'll have to cross that bridge when we get to it."