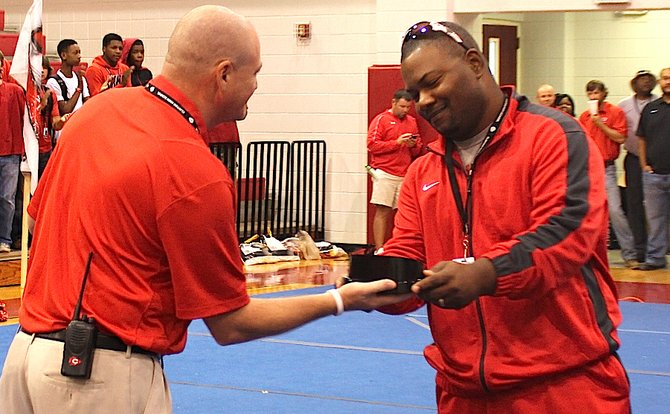 The Clinton High School Girls haven't lost a scored team track meet since 2012. The team won back-to-back state 6A competitions after defeating Meridian 101.5-95 as they defended their 2013 title.

Thanks to the Lady Arrows' dominance, head coach Johnathan Perkins won the 2014 National Federation of State High School Associations' award for girls' track and field, and it made him eligible for the NFSH regional award. The U.S. Track and Field and Cross-Country Coaches Association also named Perkins the 2014 Girls High School Track and Field Coach of the Year for Mississippi.

Perkins, who was the assistant coach, took over when former head coach Joe Queen left the school to pursue a career in firefighting. The school elevated Perkins and assistant coach Jim Peters to head-coach positions, with Perkins becoming the girls' coach and Peters becoming the boys' coach.

A graduate of Clinton High School, Perkins played football for the Arrows at Hinds Community College. He has more than 10 years of coaching experience in football and track with six years as head coach of the boys' and girls' track team for Raymond High School.

Perkins has a bachelor's degree in mathematics education from Jackson State University and teaches geometry at Clinton High School. He also coaches for the varsity football team.

Washington is entering her 10th-grade year, so the rest of the state will have to face her for the next three years.

Washington's teammate Justice Sims finished second in both events behind Washington at 12.28 seconds in the 100-meter dash and 24.89 seconds for the 200-meter run. Sims entered her junior year this fall and will continue to push Washington for the next two years.

Jasmine Johnson won the pole-vault state championship with a height of 11 feet and four inches.

The Lady Arrows ranked in the Top 100 US National High School Rankings. The team ranked eighth out of 69, 747 teams in the 4x100 meter relay and ranked seventh 38,855 teams in the 4x200 meters nationwide. The relay team was also named a Milesplit All-American Team.