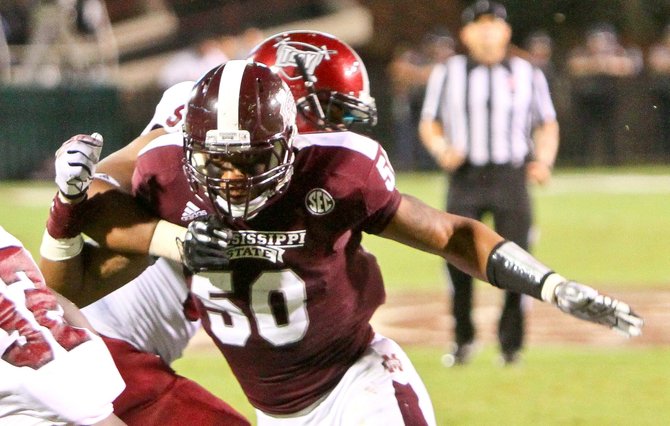 This season has been magical for Mississippi State University so far. The Bulldogs are the No. 1 team in the nation with a perfect 6-0 record.

MSU quarterback Dak Prescott has garnered most of the national attention, and rightfully so. However, the Heisman Trophy frontrunner isn't the only MSU player who has been has performing well this season. His counterpart on defense, middle linebacker Benardrick McKinney, has been equally impressive.

McKinney is essentially the quarterback of the team's defense, and even though he might not get as much of the national spotlight as Prescott, MSU wouldn't be undefeated without him. He is the glue that keeps the defense together.

The former Rosa Fort High School star was one of the most sought after players in Mississippi during his senior season. He is the first Rosa Fort player to sign with an SEC team since his 2010 high school coach McKinley Scott, a former MSU receiver.

McKinney started at quarterback his senior season and was also a standout linebacker. His team reached the 4-A playoffs, after which he made it into the North/South All-Star Game.

The Bulldogs redshirted McKinney his first year at MSU in 2011. It wasn't until his redshirt freshman season in 2012 that McKinney got his chance to shine.

McKinney certainly didn't waste his opportunity to show the SEC and the rest of the country what he can do on a football field. He finished the season with 102 total tackles, 4.5 tackles for a loss, four pass breakups, a sack and a fumble recovery.

After the season, McKinney made it onto just about every All-Freshman team, including SEC, ESPN.com and CBSSports.com. He finished with 71 tackles, seven tackles for a loss, 3.5 sacks and two fumble recoveries.

This season started with McKinney on the Bednarik, Nagurski, Butkus and Lombardi Awards watch lists. The only award McKinney isn't currently a contender for is the Heisman.

As the Bulldogs take this week off at the midpoint of the season, nearly every media outlet named McKinney to Midseason All-American teams. Dak Prescott got the cover of Sports Illustrated for back-to-back weeks, but the publication also added McKinney to its midseason team.

So far this season, McKinney has 41 tackles, six tackles for a loss and two fumble recoveries.

Mississippi State fans should enjoy McKinney while they can because after the season, it looks like he will leave school. Many scouts consider McKinney a potential first-round draft choice when the 2015 NFL Draft rolls around. He is a rare athlete that can play inside or outside linebacker and can also play in the 3-4 defense.

McKinney's play on the field this season is confirming his professional potential for many NFL scouts. If he keeps up what he has done so far in 2014, expect to hear McKinney's name called on the first night of the draft.

However, the NFL will have to wait a while for McKinney or any other Bulldogs. MSU has bigger fish to fry, with a chance at the SEC West title, a SEC Championship and a spot in the first ever FBS College Football playoff on the line in the final six games.

I am claiming him now for the Cleveland Browns - he is on my 2015 Draft Wish list!

The Browns haven't drafted a MLB in the first round since 1962 (well technically they drafted Ray Lewis - but they were the Ravens by then!)

But I think he would compliment Chris Kirksey well on the inside.