Family Feud: A Rivalry for the Ages 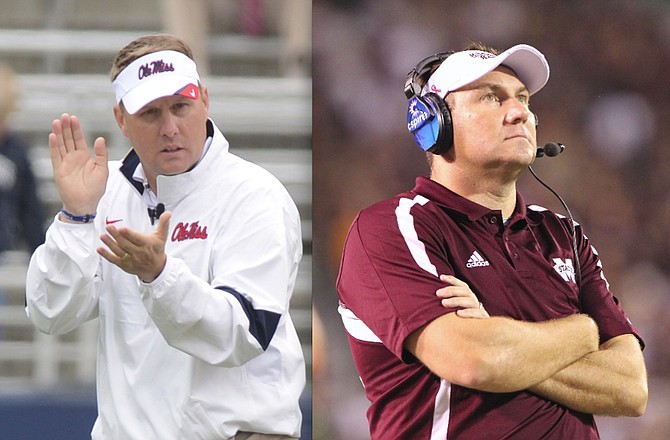 One of the best parts of college football are rivalry games. They can make or break a season in so many ways. They can save or cost jobs, dash or renew hope for next season and so much more.

There are better-known rivalry games then the annual battle between Mississippi State and Ole Miss, but it has everything you want in one. In fact, it might be one of the most underrated rivalry games in the country.

Mississippi State started playing football in 1895, and Ole Miss first fielded a team two years earlier in 1893. It was after the turn-of-the-century before both teams met on the gridiron.

Since then, these teams have met 110 times. The 2014 game will be the 111th meeting with breaks only between 1912-15 due to a feud between the two schools and 1943 due to World War II. There have only been 86 Egg Bowl meetings but more on that later.

MSU ended up winning that first matchup 17-0 in 1901, but the Rebels got revenge the next year with a 21-0 win. The teams tied in the third matchup for a 1-1-1 record in their first three games.

Both the teams started with shutout wins, and there have been 32 shutouts in this game's history. Mississippi State has shut out the Rebels 17 times, and Ole Miss has shut out the Bulldogs 15 times.

Neither team was known by its current nickname when they first met in football. Ole Miss was known as the Red and Blue before adopted the name "the Flood" starting in 1929 before adopting "Rebels" in 1936. Mississippi State started out as the Aggies before 1932 and then the Maroons and, in 1961, finally became the Bulldogs.

The second meeting of 1918 took place Dec. 7, and was the latest in the calendar year the game was played in series history. Overall, 10 of the meetings have been played in December, with the last Dec. 2, 1967 in a 10-3 Rebels win.

The most interesting fact is that legendary Bulldogs coach Dudy Noble had been the head coach for Ole Miss. Noble is one of two coaches to coach both teams, the other being Dan Martin. Martin won in 1902 as coach of the Rebels and became the Bulldogs coach in 1903 where he went 1-2-1 against his former team. Noble went 0-3 as coach of Ole Miss in 1917-18 and took over the MSU in 1922 and went 1-0 against the Rebels.

Another astounding fact is that three players have played for both teams during their college careers. Norvin E. Green was the first (Ole Miss 1900, MSU 1901-04) and was the subject of a 40-minute game delay before kickoff of the 1901 game over his eligibility to play for the Bulldogs.

The 1926 game changed the rivalry forever. Ole Miss finally broke MSU's winning streak with a 7-6 win at Bulldogs home field. The Rebels fans tried to storm the field and tear down the goal post, but MSU fans wouldn't let them.

A brawl broke out that ended when fans broke all the chairs on other fans. To prevent future fights from happening, Sigma Iota fraternity suggested a football-shaped trophy be given to the winner of the game.

Both schools split the cost of $250 for the trophy, and "The Golden Egg" trophy was born. Adding a trophy to the game sent Ole Miss on a 10-game undefeated streak.

Currently the rivalry alternates each team's campus from year to year. In the past, the game has been played in seven Mississippi cities: Starkville, Oxford, Jackson, Greenville, Tupelo, Greenwood and Clarksdale.

Mississippi State was undefeated in Tupelo, Greenville and Clarksdale going a perfect 6-0. Ole Miss won the only meeting in Columbus, the third location for the Egg Bowl. The Bulldogs won 13 games in Jackson (two games were later forfeited), and the Rebels won 15 times in the capitol city.

The 1968 meeting is unique in that it will never happen again. That game ended in a 17-17 tie and, under current overtime rules in college football, another tie will never take place in this rivalry.

It wasn't until 1978 that Steven Doyle of The Clarion-Ledger coined the term "Egg Bowl" because neither team would be going to a bowl game after the regular season. So the game was, in essence, a de-facto bowl game for both teams.

Even MSU's live Bully mascot has been part of the rivalry at times. Ole Miss students repeatedly "dog-napped" Bully the VII, Bully the XIII-A and Bully XIII-B who was the last mascot to be "dog-napped."

Perhaps the most notorious event to happen to Bully was in 1958, when Ole Miss students took Bully VIII and painted him red and blue. Bully nearly died of lead poisoning because of the paint.