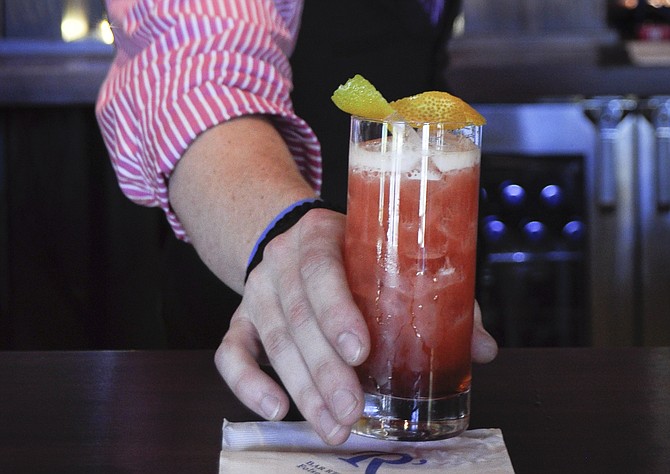 Seafood R’evolution, which will have pre-Prohibition era cocktails that highlight local history, opens Nov. 17 at Renaissance at Colony Park. Photo by Trip Burns. 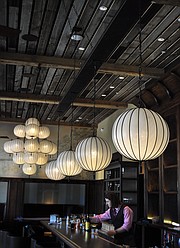 Though the word "revolution" ordinarily indicates an intention to dramatically change things, Seafood R'evolution actually seeks to preserve and honor Mississippi's seafood culture and heritage. The three months of research that chefs John Folse and Rick Tramonto, who owns Restaurant R'evolution in New Orleans, conducted after deciding to open an eatery in Mississippi are evident in every choice made for the restaurant, from the space's decor to the food and drinks.

Matt Allen, the director of wine and spirits, and Michael Wagner, head bartender, preside over the wine and spirits program. The bar area features a ceiling of reclaimed wood and lamps inspired by old glass buoys like those that once dotted the waters of the Gulf Coast. At one end, a mural reproduces a scene from the cover of one of Folse's cookbooks, and French doors open onto a patio with additional seating. The other end is flanked by the raw bar, whose menu will be separate from the restaurant offerings and will include a wide selection of crudos and multiple varieties of fresh oysters.

Bar patrons can sit at bar stools or tables to enjoy a spirit-driven menu of pre-Prohibition-era cocktails, wine or one of 65 beers (50 of which are local or regional craft brews), as well as the full restaurant menu. Both the wine list selected by Allen and cocktails created by Wagner offer innovative choices while complementing the seafood-heavy dishes, such as Gulf fish prepared to a guest's liking and served filleted or whole.

Allen is a sommelier and has worked with Folse and Tramonto for three years, helping open their Restaurant R'evolution in New Orleans. Coming to Mississippi "just made sense," Allen says, citing the state's "growing food culture and creative economy." His selection of about 300 bottles will be in a 4,000-bottle wine room large enough to accommodate charity dinners twice a year. Allen loves educating not only staff, but also wine-drinking patrons, and he looks forward to organizing wine dinners and short, after-work educational seminars on how to taste or pair wines with food.

The wine list will be American-focused, Allen explains, but will represent all the great wines of the world. By-the-glass offerings will feature local favorites, plus one selection that changes each week—a sommelier's choice that lets folks try something different.

While Allen reigns over wine world, Wagner gets to exercise his creative freedom as a mixologist, creating a cocktail menu filled with flavor and informed by local history. Wagner came to Seafood R'evolution with an interest in pre-Prohibition cocktails honed over the last few years while working behind the bar at Parlor Market and The Manship. He's excited to bring that interest to his new endeavor. "I wanted to stock the bar for my bartenders as extensively as the chefs stock the pantry for the cooks," Wagner says.

That bartenders' "pantry" includes lots of house-made juices, syrups and tinctures, local produce and 10 house-made infusions of Cathead Vodka. In a nod to the pear orchards and strawberry farms of Ridgeland, a number of cocktails highlight those flavors. One, the Choctaw Indian Agency, named after an organization on nearby Old Agency Road, includes a strawberry-balsamic shrub, a pear-infused tincture and whiskey.

Like the food menu, the beverage menu will change throughout the year to reflect fresh produce and seasonality.

With staff busily working and training weeks in advance, Allen is confident that everyone will be ready to hit the ground running on opening day Nov. 17. It promises to be a great place to raise a glass and soak in some Mississippi history with some innovative new tricks.