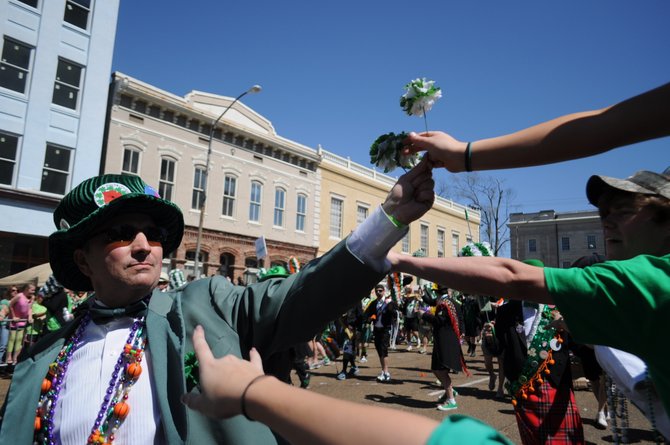 A seasoned veteran of the Mal’s St. Paddy’s Parade day, Girl About Town Julie Skipper shares her tips for making the most of it. Photo by Trip Burns.

Mal's St. Paddy's Parade day is one of my favorite days in Jackson. To some, it's just an excuse to day drink, and that's fine (as long as you imbibe responsibly and don't drive home). But what makes it special to me is that it's all about celebrating our city in an irreverent, fun spirit and in an environment where everyone is welcome.

That being said, the day is a marathon, not a sprint, so it's important to have a plan. Herewith is my approach, honed over years of trial and error.

Kick things off (but not too hard). Friday night is the Marching MALfunctions Second Line Stomp. For this event, the marching krewes invite anyone who wants to participate to gather at the King Edward Hotel at 5 p.m. and march to Hal & Mal's (200 S. Commerce St.) for a party. It's a festive way to start the weekend, but Saturday is the main event. I generally march in the stomp, but I head home by 8 p.m. so I don't wear myself out.

Ready supplies and start hydrating. Friday night, I purchase adult beverages and mixers, bottled water, snacks, ice, sunscreen—all the parade necessities I don't want to purchase in the morning when I'm dressed up like a crazy person. Also, on Friday night I assemble my traditional food contribution to the morning's pre-parade gathering.

It's the big day! I wake up way before my alarm like a kid on Christmas morning, and the hardest part is to wait until a decent hour to head outside. Luckily, if you're an early riser, you can participate in or watch the 5K (though I definitely don't run on parade day).

Get dressed. On this one day of the year (and only this one day), I strongly advocate putting comfort before fashion when it comes to footwear. Standing—or marching—for a long time, with a lot of people, requires practicality. Don't wear stupid shoes unless you want to be utterly miserable. I consider "stupid" parade shoes anything with a stiletto, giant wedge, ankle strap that will cut into you, or flip-flops (all those people who wear them regardless of the drink spillage everywhere, gross). Converse Chuck Taylors are an excellent option, providing comfort, coverage and a hipster style element.

Drink water. My parade-day rule is to refrain from any adult beverage before 10 a.m. The goal is to not peak too early and miss out on the street party. Generally, a group of downtowners and their friends enjoys a pre-parade gathering on the balcony of the Electric Building (308 E. Pearl St.), so I go to that for some green eggs and ham, green cookies, green, well, everything. Last year, I was invited to join the marching krewe the Nugget League of Mayhem, so now parade morning includes going to Hal & Mal's to meet the girls to dress, mingle with the other marching krewes and line up for the parade.

Practice patience when trying to get into the street party afterwards. The line is long but worth it. Know that the staff at Hal & Mal's prepares for this day like it's their Olympics. It's crazy, it's crowded, but they will get you what you need.