Down the Rabbit Hole 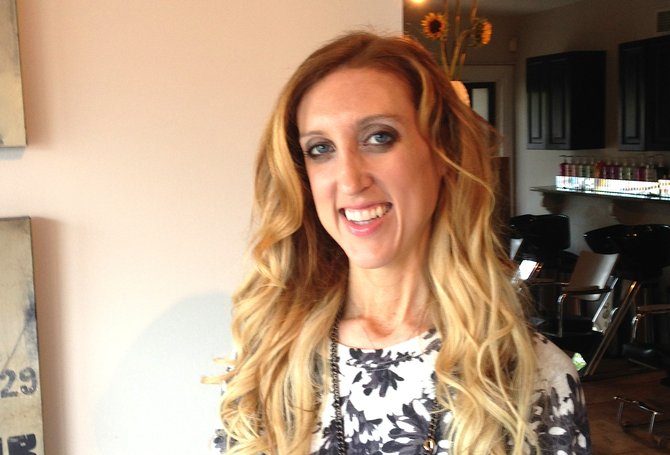 Back in 2011, after becoming friends with Eddie Outlaw, co-owner of the William Wallace Salon (2939 Old Canton Road, 601-982-8300), he invited me to join their crew to march in the Zippity Doo Dah Parade in Fondren. For the occasion, we all dressed as characters from Alice in Wonderland—Eddie as the Mad Hatter, his partner (now husband) Justin McPherson as the White Rabbit, Karen Hearn as the Red Queen and I as Alice.

I procured a platinum-blonde wig for my role, and when Justin did my hair and makeup for the day, he authoritatively said, "You could definitely go blonde." Ever since, I've wondered ... could I? Should I?

Since then, I've entrusted my locks to Justin, and while I've increased my hair in length, I've remained true to my brunette roots ... until now. This summer, I took the plunge—and Justin's advice—and decided to find out if blondes really do have more fun.

The process was a bit more involved than a simple dye job because I have extensions, so we determined a color scheme, as it were, before ordering the hair—it comes ready to install in the color you want, and then your own hair is dyed to match. We settled on three shades of blonde, so as to have natural-looking gradients and tone, with my own hair (the top layer) lightened to the darkest shade.

When the hair arrived, it was time to schedule a Hairapalooza: taking old extensions out, coloring my own, installing the new hair. Armed with a book and a giant stack of magazines, I was ready for the essentially day-long process.

As usual, the salon kept me comfortable for the duration, and in the end, it turned out fabulous. Justin knows his stuff; the color was great, without being overly processed-looking or wrong for my skin tone. And his styling is always gorgeous—not much is better than a William Wallace blow-out. I couldn't wait to take the hair for a spin.

I premiered it to a friend and my fellow at 1908 Provisions (734 Fairview St., fairviewinn.com). I was still adjusting to the change—blonde is a rather drastic one—but they responded enthusiastically. So did the 1908 staff (I'm a regular there). The hostess even decided that my color change might give her the push to try a different hair color herself.

"I've always wanted to, but I just get scared," she said, to which my new blonde self replied, "It's just hair; you can change it back."

As for whether blondes do have more fun? Well, the verdict is still out. I can say that I've had some interactions as a blonde that I never had as a brunette. For instance, while stopping for gasoline on a recent road trip, a man exiting the shop as I entered gave me a once-over and grunted. No words, just a grunt.

Then, a guy slowed down, rolled down his window, and asked for my name and if anyone ever tells me how sexy I am. As a brunette, I do not have much experience with such comments, so I just tried to laugh it off and asked why he needed to know my name. Do guys actually think this sort of thing works? There's entertainment value in being blonde, I suppose.

While I'll continue to observe whether I am treated differently as a blonde, I already know that my treatment of the color is different. Namely, it requires upkeep and care, which is fine; any color job does. But it also requires thinking about other colors, including my makeup and skin tone. No complaints about needing to buy cosmetics here! I headed to the counter to update things with more golden hues, a little more color for my lips and some bronzer.

Another requirement the blonde mandates is visits to Body Anew Medical Spa (113 W. Jackson Street, Ridgeland, 601.605.0452, bodyanewmedicalspa.com) for their Fantasy Tan, the ultimate in a customized spray-tan experience. They blend a specific color just for you and apply it with an airbrush, so I get a natural color that's perfect for my skin tone and never orange. Since I feel very beachy and summery with golden locks, a golden sun-free glow is a must.

All in all, I'm glad to have gone blonde ... at least for a season. Of course, Justin is already planning how we'll transition it for fall. I'm game. After all, it's just hair; why not play with it?