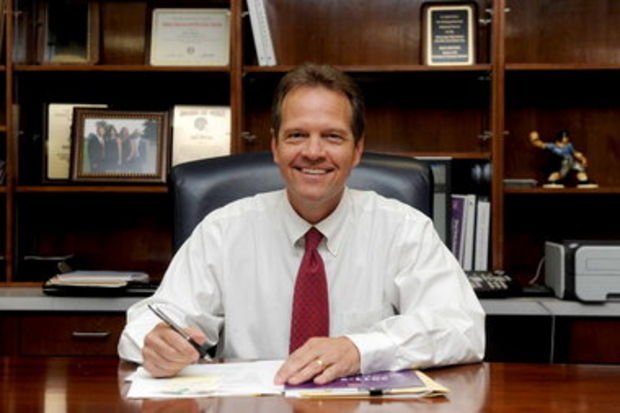 Jackson could see its second major sports-related economic loss in three years by the end of this month, when the capital city possibly loses the state football championships held at Veterans Memorial Stadium. The city has hosted the games since 1992.

Don Hinton, executive director of the Mississippi High School Activities Association, wants to showcase the event in other parts of the state, letting Mississippi State University, University of Mississippi and University of Southern Mississippi host the championship on a rotating basis instead of it being exclusive to Jackson.

The MHSAA director has worked at Northwest Rankin High School, Callaway High Schoool, Murrah High School, Jim Hill High School and other schools during his time as a teacher, principal, and coach for football, girls' basketball and track and field.

Hinton graduated from Bay Springs High School and played football at Jones Junior College. He later went to Mississippi College and graduated with a bachelor's degree in physical education before going on to complete his master's degree in educational administration from USM.

No matter who hosts the event, Jackson will lose out on the estimated $2 million fans spend in the capital city each year during the championships and the Capital City Classic.

JSU, which owns Veterans Memorial Stadium, did get a chance to host the event. However, the school has a hang up with putting in a bid, saying MHSAA still owes the school $37,000 from last year's event.

While the plan seems to have support from coaches, it will be interesting to see how things play out if a team from the Gulf Coast has to travel all the way to Starkville or Oxford to play against a team with a much shorter trip, or for a team from far north Mississippi to travel to USM.

The Association will be required to accomodate the teams either through scheduling or hotel stays. The real issue would be the fans. Biloxi parents might not mind spending the extra money to go see their child play in Oxford, but what about all the casual fans. These are the fans from Biloxi who could scrap together money for a tank of gas to Jackson but probably can't afford a trip to Oxford which requires time off work, more gas and an overnight stay. Moving away from a central location might jeopardize those large crowds of fans who can't afford a long drive and a hotel stay.

It's funny that MHSAA keeps saying the they are moving the games because JSU wouldn't submit a bid. That's a joke. The moving of the games has been a done deal for a while now. Just google articles from Jan 2014 and before about MHSAA moving the games. MHSAA wanted the format used in Alabama and keeping the games in Jackson was NEVER an option for them. The continued reference to JSU is just a smoke screen to cover their tails and to make it seem as though JSU is the real reason for the movement of the games. Publish the bids MHSAA from the schools you say submitted them. And since you are a public non-profit organization, if you don't publish them, I will request them and publish them myself.

Let's be fair. I hate that the games are being moved for the sake of economic reasons benefitting the city. However, MHSAA has never said they were moving the games because JSU did not submit the bid. They've pretty much always said that it was a issue with the condition of the facilities. And if truth be told, I'm convinced that Jackson's image of a high crime area was another reason.
You are right, the discussion on moving the games has been going on for several years. And if I'm not mistaken, both MS State and Ole MS submitted equal bids of $50,000 to host the games. I believe that's public knowledge.

833maple where is the $50,000 reported to host the games? It's not public knowledge because it hasn't been in ANY of the articles or reported stories. Perhaps I just missed it. You take them at 'what they say'. I don't. The other items you mentioned don't matter because they were not involved in the decision. Further, MHSAA IMPLIED to the reporting media that they were moving because JSU didn't submit a bid. Of course they wouldn't say that directly. They let their surrogates do it for them. A lie doesn't care who tells it. But anyway.....

Knowledge. MHSAA is not a government unit but rather an association supported by the fees of its members, along with other fees assessed for different activities conducted by the association. The $50,000 comes from the association's budget, not public coffers. And yes, it is public knowledge that both MS State and Ole MS submitted bids of $50,000 to host the event; it was reported by the media. These schools will charge MHSAA $50,000 to host and provide a venue for state championship football games. And they never implied they were moving because JSU would not submit a bid.
I guess in an effort to appease JSU, they are increasing the number of basketball games played for the state tournament, and those extra games will be played at JSU.

MHSAA re-initiated the quarterfinals in the state basketball championships and those games will be played at Jackson State. Huge for JSU's basketball program and Coach Brent, recruiters and high school players who get a chance to travel to Jackson.

Basketball reigns in Jackson anyway. And now Coach Billups is back.