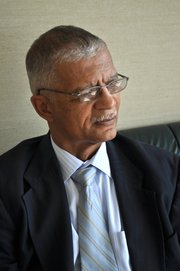 Jackson Mayor Chokwe Lumumba has said that his previous experience working with former Gov. Haley Barbour to get clemency for his clients, the Scott Sisters, demonstrates that he will be able to effectively lobby state officials.

Christmas has come and gone, but Jackson leadership is hoping the Mississippi Legislature will find a little room to stuff a few more much-needed gifts in the city's stocking.

To that end, the city has put forth an aggressive agenda that includes long-shot initiatives like a re-streaming gas tax revenue from state coffers to municipal coffers, and proposals the Legislature is likely to find harmless, such as reimbursement for the Jackson Police Department's security at state events inside the city.

The city is going into the new session with a new mayor, Chokwe Lumumba, and a new lobbyist, the director of policy for former Mayor Harvey Johnson Jr., Walter Zinn.

Most districts in rural Mississippi have elected boards, but it is not uncommon for districts in some of the state's more highly populated areas to have an appointed board.

It's unclear exactly how voting would work and what standards for nominees would be, but Zinn said many of the details would be ironed out during the crafting of the legislation. "If you want to have term limits or minimal qualifications, we can always go one of two routes and work that out," he said. "We can make it local and private, or we can put a population classification on it; either way, it will only be germane to Jackson."

The Legislature made a similar caveat for Jackson on the proposed 1-percent sales tax, a 2009 option that included language regarding "cities over 150,000 in population." Jackson is the only city in the state with a population higher than 70,000.

City Council President Charles Tillman, who once served as JPS board president, said he had reservations over who would go through the "rigamarole" of a campaign and election for a job that is long on hours and short on pay. Tony Yarber had his answer: the same kind of people who would run for city council.

"When you were describing that job, you could have been describing us," Yarber said to Tillman at the Dec. 16 Legislative Committee meeting.

"When we have a situation like we had last week, when the bus drivers all went on strike, I know you got more calls than the school-board representative for your ward," Yarber added. "I know that because I know how many calls I got. I don't know about you, but I don't like to be held accountable for things I can't pull the trigger on."

The city also wants support for a bill that would reimburse the Jackson Police Department, or the city, for extra security at big events that take place in the capital city.

Zinn said in December that the Mississippi State Fair, which comes to town every October, often means overtime for traffic cops who provide security and help direct traffic to avoid long lines and congestion. It complicates things, he added, when an organization like Jackson State University, which has a contract with the city to provide security, has a home football game during the time the State Fair is in town.

"We've brought this up before, and essentially we are looking to make an appropriation to law enforcement to cover what has turned into overtime, as the state fair has seen record attendance for a couple of years running," Zinn said. "It becomes hard to provide security and traffic controls at all the events."

Other than the fair, Jackson is also home to the Mississippi High School Athletics and Activities Association's basketball tournament and six state championship football games at the Mississippi Coliseum and Memorial Stadium, respectively.

Yet another initiative, and the one that best fits with what Lumumba's vision that helped him to an overwhelming victory in the mayoral race in July, is the expansion of the role of cooperatives in the city.

Long reserved, in Mississippi, for rural farming, cooperatives are autonomous associations of workers voluntarily cooperating for their mutual, social, economic and cultural benefit.

Cooperatives—or co-ops—include non-profit community organizations and businesses that are not owned and managed by one certain person or company.

The three types of co-ops Lumumba would like to see are consumer co-ops (for things like food, child care, housing and credit unions) like Rainbow Grocery in Fondren, producer co-ops that pool process and market the member products and worker co-ops, which are owned by the people who work at the business.

"These community-oriented worker co-ops create more businesses than their own," Zinn said. "This bill got pretty far last year, but I think the interest from this administration is to create a way for people to bring themselves up.

It's consistent with what the Republicans are always saying about 'pulling yourself up by your own bootstraps.'"

The city is also looking for two concessions from the Legislature when it comes to crime and the court system. Current law prevents Mississippi cities and towns from appointing more than six municipal judges at a time, which Zinn told the city council has potential to cause a backup in cases.

The city is requesting the power to appoint up to 10 judges, even if some are on a temporary basis, to expedite the court process.

The city would also like a financial endorsement for its prisoner re-entry program, which Zinn said has been successful but is underfunded.

He estimated the city has about 600 releases in the city annually, and participating in the re-entry program greatly decreases the chances of the released prisoner returning to jail.

Jackson's experience with the sales-tax legislation could be a model for other cities, said Quincy Mukoro, public affairs director for the Mississippi Municipal League.

The MML will once again attempt to pass what it calls the Community Economic Development Act, or local option sales tax. CEDA would be similar to the law that authorizes Jackson's to levy a 1-percent tax on certain sales.

Under the MML bill, 60 percent of citizens would have to approve the tax, which will only be levied for specific projects, nor does the plan involve implementing oversight commissions, which long served as an obstacle to Jackson's holding a sales-tax vote. Mukoro and MML see CEDA as a way to give local communities more control over their economic destinies.

As evidence, he points to Oklahoma City and the state of Texas, both of which have passed versions of a local-option sales tax.

Economic observers, including current Oklahoma City Mayor Mick Cornett, have heralded OKC's local option experience as a success and credit it for keeping the city afloat during troubling economic times.

Texas' local-option tax goes even further than the one being floated in Mississippi, and allows municipalities to hold referendums for public safety.

In year's past, the local-option sales tax has met bipartisan opposition, with fiscal conservatives panning the effort as a tax increase.

In Jackson and smaller cities around the state, Mukoro sees the local-option sales tax as potential economic game-changer.

"Fix the infrastructure, and the sky's the limit," he said.

Some thoughts on JPS: Most definitely, this body needs to be elected by the voters of the Jackson City School District. We have suffered too long from some very expensive mismanagement of this district, both in terms of personnel and in terms of contracts and money. We need a ward type election, with either the President of the Board being elected at-large or a rotating chair, and staggered terms. Also, very important--All elected members would face a recall election if more than 10% of the people who voted for them in the last election signed a recall petition. We need recall power. There should be seven Board members. The Board may also have non-voting members (a teacher, a parent, Head of a student council, etc.).