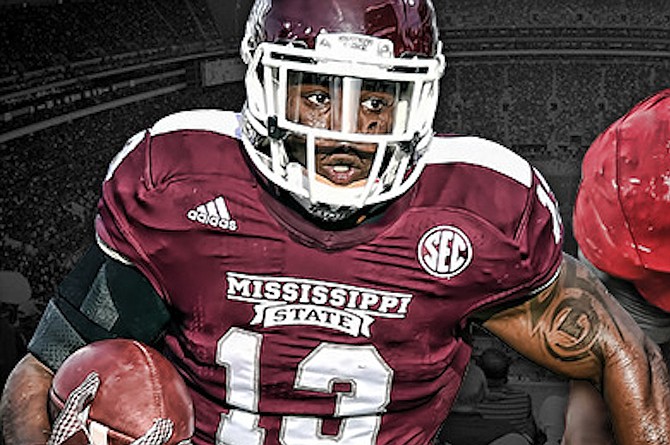 Mississippi State University players, coaches and fans call him "Bowling Ball" due to a low center of gravity that allows him to bowl over opposing defenses. After the Bulldogs' win against the University of Kentucky for the first time as the nation's No. 1 ranked team, the national media were enamored over his backside.

It took time, but the spotlight finally found MSU running back Josh Robinson. His story to just get to this point is amazing, and it took a whole community to get him here.

Robinson was born Aug. 24, 1992, to a 16-year-old mother and grew up in the communities of Bogalusa and Franklinton, La. Since his father was missing from his life until high school and his mother was in and out of jail, his grandmother raised him.

His life changed when, at age 11, his grandmother, Gwendolyn Robinson Brown, died of a heart attack, leaving the young boy on his own. Robinson then lived with his mother at times and bounced around other family members and friends' homes at others. Robinson even lived in his car for a short while when he was homeless.

Family and other people in the community helped keep Robinson on the path to college. The 5'9" running back was a star at Franklinton High School and even beat his current teammate Dak Prescott's Haughton High School team in the Class 4-A Semifinals Louisiana High School football playoffs. His team won the 2010 Class 4-A with a 34-28 win over Edna Karr in the Superdome.

Mississippi State redshirted Robinson during the 2011 season, because he had to sit behind Vick Ballard and LaDarius Perkins. He was the main backup to Perkins in the 2012 season and rushed for just 335 yards on 55 carries with one touchdown.

Once again in the 2013 season, Robinson was the main backup to Perkins. He ran for 459 yards on 78 carries with three touchdowns. In the Bulldogs 24-17 overtime win over Arkansas, Robinson had his first 100-yard rushing game with 101 yards on 17 rushes.

Finally in the 2014 season, it was time for Robinson to shine as the starting running back. He is currently third in the SEC in rushing. He hasn't wasted the opportunity, getting 1,084 yards on 165 carries with 11 touchdowns.

Against Kentucky, Robinson shattered his previous career high of 197 yards against LSU with 198 yards and two touchdowns against the Wildcats. He had a highlight run where he broke seven tackles during a 22-yard run that has to be seen to be believed.

Since the Kentucky game, Robinson hasn't run for more than 64 yards, which he did against Arkansas. He had season lows of 33 yards against Tennessee-Martin and 36 yards against Alabama. He hasn't found the end zone since scoring one touchdown against the Razorbacks. He ran 44 yards in the Egg Bowl against the University of Mississippi.