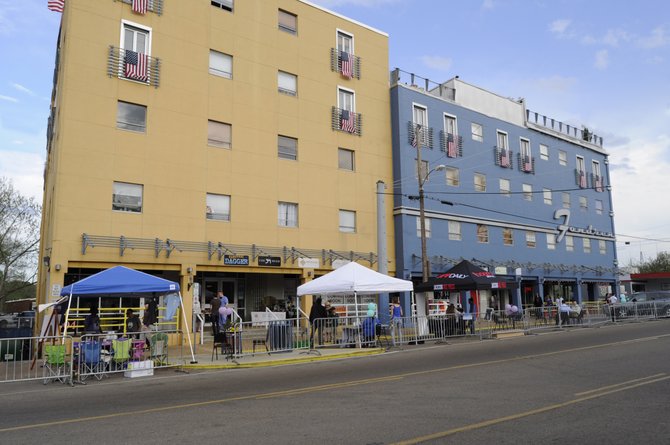 Fondren After 5 is experiencing an influx of energy and excitement these days, as organizers reinvigorate the monthly event. Photo by Trip Burns.

Sometimes, among activities or places that come to feel routine, you find something new. Such was the case for me at the last Fondren After 5 and the weekend following it. I've always enjoyed and appreciated the monthly event; it's fun to wander around the funky neighborhood and run into friends while seeing what the artisans and shops have to offer. I remember when it started (best guestimates from an informal poll of Fondrenites and my memory peg it at five years ago), and how exciting it was as it grew to be a highlight of the month. It was a place I could see and feel Jackson's burgeoning creative class and number of young professionals really grow and flourish.

Before the April event, I hadn't been in a few months, but springtime seemed like a good time to revisit it. I made plans to meet my friend Anna and Joseph, a new friend of hers whom she'd met while working together on #wegotyourbackmississippi, a fundraiser for Grace House (a transitional living facility for individuals diagnosed with HIV/AIDS, gracehousems.org). I'd met Joseph briefly before we were on a radio show at the same time, and looked forward to hanging out with them both.

After stopping by Fondren Muse (3413 N. State Street, fondrenmuse.blogspot.com) to drop off some items on consignment and eye a fringed purse I might return to snap up, I rendezvous-ed with Anna at Miso (3100 N. State St., eatatmiso.com) for some pre-game nosh and wine. A little while later, we hit the streets to meet up with Joseph at Fondren Corner. The spring weather seemed to have brought out a good crowd, and along the way, we stopped to chat with friends on the patio at Sneaky Beans (2914 N. State St., sneakybeans.com) and to play with a puppy at the CARA adoption booth (I only just resisted taking her home with me).

At Fondren Corner, we perused Wilai (where my companions informed me I really need the "I hate mayonnaise" T-shirt) and visited with One Blu Wall gallery owner Christina Cannon as we admired her work. After picking up free Walker's shirts from Studio Chane (chane.com), we rounded the corner at the base of the hill before backtracking to end the evening at The Apothecary at Brent's Drugs (655 Duling Ave., 769-257-3517). I hadn't been in what felt like much too long, and was happy to settle in and see Robert Arender, who always knows just what I want to drink even when I don't, behind the bar.

Inside, we enjoyed the Speeding Motorcycle, a cocktail from the new spring menu, and spotted another friend who had brought along a young woman who had just moved to town. Her first week had been an active one, and the night out in Fondren excited her about Jackson's energy and creative class.

That Sunday night, it was time for the fundraiser Anna and Joseph helped plan, so I braved the rain and headed to Fenian's Pub (901 E. Fortification St.), another old haunt I hadn't been to in a long time. Despite the weather, a solid crowd of all ages turned out for the first-time event. Silent auction items and a raffle helped raise more than $4,000 for Grace House, and I got to enjoy the early evening cozied up in a corner booth with several gal pals, catching up and enjoying acoustic tunes from Jason Alexander.

At one point, he even performed a mash-up of pop songs ranging from Grease's "You're the One That I Want" to Lady Gaga. Needless to say, we were enthralled and left clamoring for more.

After seeing two old gathering places—Fondren After 5 and Fenian's—but with some new folks and new events, I can't help but be encouraged at the energy that those dedicated to Jackson continue to pour into the city by revamping and re-energizing traditions, and by starting new ones or introducing new people to what we have here. Springtime tends to be synonymous with renewal and rebirth, so maybe it's only appropriate to notice a renewal of energy in the places we go and events we attend, too.