A Lighter Side of Char | Jackson Free Press | Jackson, MS

A Lighter Side of Char 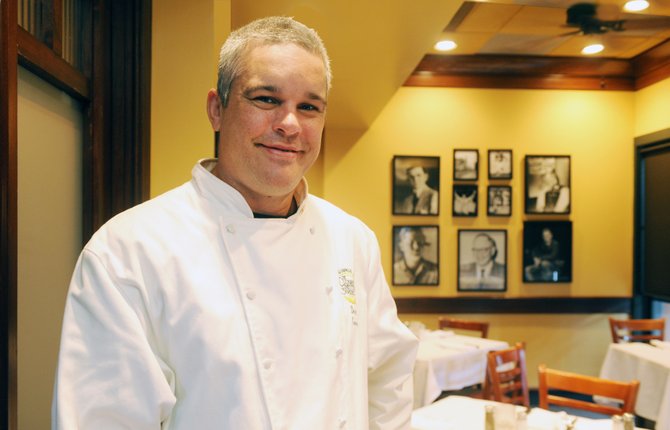 As executive chef at Char, Derek George is excited about bringing in some new seafood dishes to the classic Jackson eatery.

Derek George knows that most Jacksonians think of Char Restaurant as a steakhouse. But George, the executive chef at Char, is out to make it a destination for seafood lovers as well. A graduate of the Culinary Institute of America with 20-plus years of experience in the restaurant industry, George clearly takes pride in his work.

Having been at Char for about three years, he recognizes the restaurant's place in the Jackson culinary landscape—many patrons have been loyal since the beginning and expect certain things to stay the same. Giving people what they've come to expect from the restaurant and honoring the traditional steakhouse standards while also working to ensure it stays relevant and new to expand its customer base sometimes can be a challenge. But while maintaining the essential spirit and ethos of Char as a steakhouse, the chef draws on his culinary background and experience over the years with ethnic foods and ingredients to subtly introduce dishes that include a fusion of flavors.

Over the course of the next month, diners will notice some changes to the menu as Chef George and his staff expand its seafood offerings. "We want to appeal to a broader crowd and lighten things up a little," he explains. This means adding dishes that incorporate techniques like coulis, vegetable purees and flavored oils, with less emphasis on butter sauces. George adds that these items will introduce preparations that require more skill from the kitchen staff, and he looks forward to introducing customers and staff alike to them.

George explains that his culinary philosophy is to keep flavors simple and highlight the freshest ingredients possible. "I'm a minimalist in the kitchen," he says. That means he keeps the shelves pretty bare, preferring to restock ingredients—particularly the fish, most of which comes up from the Gulf Coast and New Orleans—every day. Each day's menu includes a daily catch feature, both at lunch and dinner, and the fish varies based on what looks best on the truck that day. Lately, the selection has included snapper, mahi-mahi, amberjack, scallops, Biloxi snapper (also called sheephead) and redfish—always popular among Jackson customers. George works with a purveyor out of New Orleans who brings quality product; he brags that he's never had to turn anything delivered down for not being up to standards.

Currently, one of the most popular seafood items on the menu is a pecan-crusted blackfish topped with jumbo lump crab and Worcestershire butter sauce. Another customer favorite harkens back to George's love of fusion dishes: sesame-crusted sushi grade ahi tuna served with braised baby bok choy, sweet peppers, and a lemongrass-cilantro broth.

Soon the menu also will include twists and updates on old favorites, like a shrimp dish with risotto (Char's fine-dining version of shrimp and grits) and a calamari dish. George seems to be toying with the idea of mussels; you can see his mind pondering the possibilities as he talks about different proteins. Another new set of offerings will be a "Chartini" menu aimed at bar patrons: shared dishes served in martini glasses. With the restaurant's well-loved bar and lounge area and expansive wine list, it made sense to add some items that are made for communal eating with a group, rather than full-on entrees. They can also be a good way to sample a variety of flavors and preparations without committing to an entire dish.

While Char has always been and will remain a steakhouse (the chef proudly talks about the quality beef he gets from Chicago), with Chef George at the helm, you might just find yourself forgoing the red meat in favor of fish next time you visit.