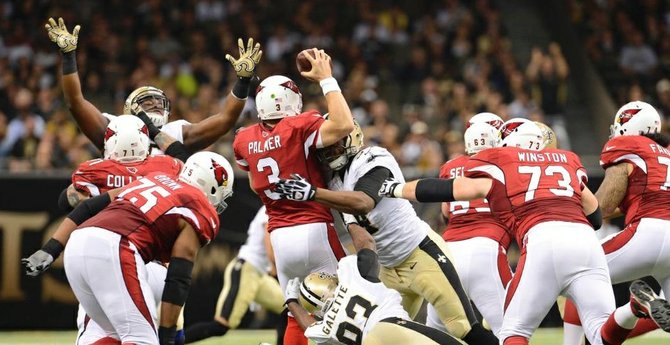 The New Orleans Saints are 3-0 after the first three weeks of this season, which is a complete turnaround of last year's 0-3 start. The turnaround may be due in large part to how much the Saints' defense has improved over last year.

The Saints have improved in both passing and rushing defense. New Orleans allowed an average of 215 yards on the ground last season compared to just 111.3 rushing yards this season.

Only one opponent, Tampa Bay, has rushed for more than 100 yards against the Saints' stout new defense. Both Atlanta and Arizona failed to even reach 90 yards rushing.

During last season's 16 games, New Orleans was only able to hold three opponents to under a 100 yards rushing. The Saints are just one game away from equaling last year's total in just three games this season.

The Saints are only allowing 12.7 points this season, which puts the team in fifth place in the league through three games. Right now, New Orleans has the fourth-best defense overall in the NFL.

By allowing few rushing yards, the New Orleans defense is not getting beaten on play action passes.

One of the big reasons for the Saints defensive turnaround is defensive end Cameron Jordan. Either the light has finally clicked on for Jordan, or new defensive coordinator Rob Ryan has found ways to put Jordan in positions where he can succeed. Either way, Jordan has three sacks and one forced fumble in three games this season. He has three forced fumbles and nine sacks in his first two years in the league.

Jordan is finally looking like the player the Saints hoped he would become when the team grabbed him in the first round of the 2011 NFL draft. It's likely New Orleans wishes they could say the same about Mark Ingram, their other first round pick that year.

The Saints defense has been so good that it's best to go low when predicting the score in the Saints Score Facebook game. Pick wisely to win that $25 dollar gift card to Cool Al's.