Preserving and Updating the Eastland Courthouse 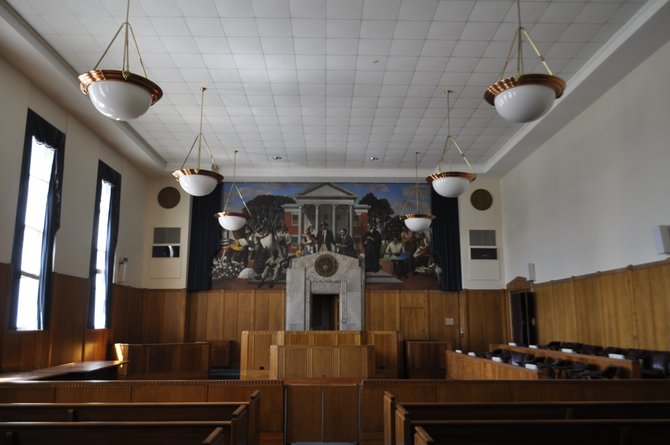 The courtroom on the fourth floor features the controversial 1938 mural on one of its walls that is one part of the James O. Eastland Federal Building that must be preserved, as mandated by the Mississippi Department of Archives and History. Photo by Trip Burns

The front of the Eastland Federal Building displays the art-deco style that was popular at the time a firm out of Cincinnati constructed the building.

Looking at the view from a corner office on the fourth floor of the James O. Eastland Federal Building, it's easy to see why someone would want to live in the 80-year-old building at the corner of Capitol and West streets.

Investor and lead developer Jason Goree hired Decker to transform the historic Art Deco building into a mixed-used space that could be open to residents in about a year.

"2014—that's our hope," Goree said Monday, Sept. 23. "We'd like to open up the fifth-floor residential area by summer of 2014, and if we hit that mark, we should be able to open the rest of the building by the end of the year."

The $20 million project is ambitious on a couple of fronts. First, the building needs new heat and air-conditioning units, and each residential space needs its own temperature control. It also needs a stairwell, as the only point of egress is a flight of stairs on one side of the U-shaped building.

The second challenge, and the one that Decker is the most excited about, is the balance he must strike between updating the building and preserving its past. The Mississippi Department of Archives and History placed the building on the National Registry of protected buildings in 1976 as part of the Smith Park Architectural District, so Decker must consider some of the building's oldest and most distinct features.

"There are a lot of things we must preserve while at the same time bringing the building into the modern era where people will want to live," Decker said. "You'll be able to look at the building and see its charm, but you'll see where we've made some renovations and  updated it. You'll be able to see the layers of history."

The first layer is evident almost everywhere you go. The building itself is named after one of the most well-known racists in Mississippi's history, former U.S. Sen. James Eastland. Eastland was staunchly opposed to the Civil Rights Act of 1964 and the Voting Rights Act of 1965, and called the disappearance of three civil rights workers in Neshoba County a "publicity stunt" before their bodies were recovered in 1964.

The main courtroom on the fourth floor is wide open with vaulted ceilings. On one of its walls is a gigantic 1938 mural that depicts southern life in the early 1900s. At the center of the mural is a depiction of a white Mississippi family "adjusting to social problems through the advice of a court representative and a minister." Directly to the left is an African American man playing a banjo and singing spirituals, and to the left of that is a black sharecropper picking cotton in the fields, while a white man takes account of its weight.

"(The mural) is one point of contention," said Goree, who is African American. "But that's a big theme that we are carrying throughout the building: preserving our past and not forgetting where we came from, while renovating and updating the building so it can be modern and relevant again."

The plans for this particular courtroom, which has hosted everything from civil rights cases to the trial of former Klansman James Ford Seale, will make it into a public space where residents can lounge, and it should be available for residents to rent for events, with catering options from the first-floor restaurant.

But not all aspects of the building's history are detriments. The marble floors and old pews from the courtrooms are distinct, and Decker said he hopes to incorporate a lot of the old architecture into the finished product.

The MSDAH will have an inspector make routine walk-throughs during the demolition and renovation process to make sure the building's history is being properly preserved.

Along with Goree, Jackson attorneys Tom Tardy, Marcy Croft and Jason Watkins combine to make up the project's investment team. Watkins is the son of King Edward Hotel, Standard Life Building and Farish Street developer David Watkins, but Goree said neither the elder Watkins nor his company, Watkins Development, is investing or playing a role in the renovation project.