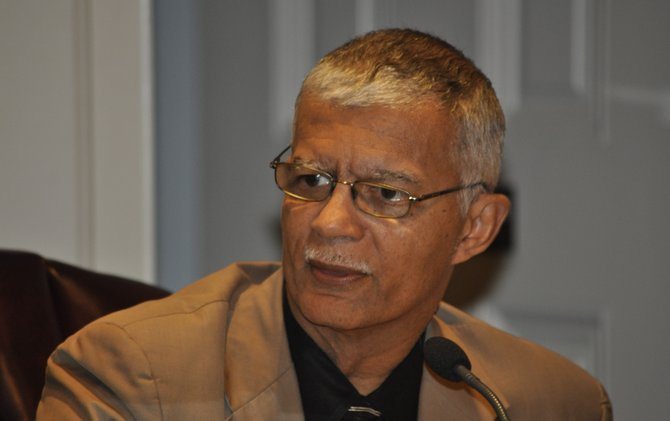 Mayor Chokwe Lumumba is re-allocating 5.56 mills in tax money to bail out the zoo and finish the Highway 80 JATRAN facility. Photo by Trip Burns

Budget talks heated Sept. 5 as Mayor Chokwe Lumumba began distributing some of the funds from his $503 million budget, starting with re-allocating $6.5 million from the public schools. The funds should help Jackson address nagging problems across the city.

In a 5-1 vote and with Ward 1 Councilman Quentin Whitwell the lone member in opposition, the council approved a measure to put $1.33 million toward finishing construction on the JATRAN facility on Highway 80, and to pay off $2.6 million in previous bond debt. The measure also added $949,000 to street-resurfacing funds, approximately $1 million into fixing the city's rampant drainage problems, $700,000 to pay off a loan for the Jackson Zoological Park—so it can keep its accreditation, the mayor said—and a small amount to pay for an audit of the city's operations.

"We are not in the business of standing still anymore," Lumumba said to council members and citizens who filled the council chambers for the special hearing. "We are in the business of moving forward—and quickly. When I was running for mayor, I talked a lot about how the people must decide. Well, the other side of that is the people must take responsibility. That's what we're doing."

Lumumba was adamant that the city was not taking any funds from the JPS budget that the school district needs this year. As he has explained to the council before, JPS renegotiated its debt from a 2006 bond measure, which freed up the 5.56 mills—the measurement Mississippi counties and municipalities use to assess property taxes—that could be used elsewhere.

"Because the debt service needs of the district are lower this coming school year than the previous year due to refinancing, we have a one-year period when the debt service payments would be lower," former JPS board member George Schimmel said. "I believe the mayor is just making use of that one-year drop in debt service to use that prop as an opportunity to make some infrastructure improvements."

District 28 Mississippi Sen. Sollie Norwood, (D-Jackson), who also previously served on JPS' board, was the only Jackson citizen signed up to speak during the public-comments portion of the meeting. He asked questions on behalf of people who are "concerned about the individuals that are currently struggling to pay their water and sewer bills on their monthly income," he said.

"Will there be money going to pay administrative costs or salaries? Or are these monies going to be set aside to pay for infrastructure?" Norwood asked. "We have a history, in Jackson, of monies not always going to where they are supposed to go."

Lumumba responded: "This is about doing what we have to do to get the water and sewer systems running the way it is supposed to run."

The first-term mayor, who just entered his third month in office, has received scrutiny at town-hall meetings for proposing rate increases for water and sewer services to help pay for work to bring Jackson into compliance with a U.S. Environmental Protection Agency consent decree. Jackson agreed to the decree in 2009, committing the city to spend $400 million on its wastewater management system over the next 17 years.

"I agree, in principle, that we need to take whatever measures we need to take to address this problem," Norwood said. "I don't like the fact that we are passing the bill on to the taxpayer in the current state of the economy, but this is probably the quickest way to pay for these improvements.

"The people I talk to, they don't have a problem with a minimal increase. They want to make sure the quality of life is improved. ... At the same time, we need to continue to look for alternative funding, like grants, to make up the difference so we don't pass on any more (of the burden) than we have to."

Norwood worked in government long enough to know that grant dollars are scarce and you just can't reach in a hat and pull out a grant award...come on man!