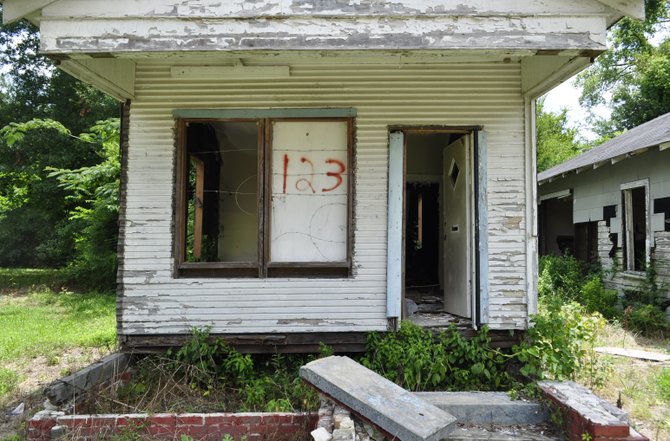 Abandoned and dilapidated houses, such as this one on Farish Street, are common in parts of Jackson and neighbors are fed up. Photo by Trip Burns

Downtown is abuzz over the ongoing feud between the Jackson Redevelopment Authority and one of Jackson's most prominent developers, David Watkins, and his Farish Street Entertainment District project.

Mississippi Sen. John Horhn (D-Jackson), who sponsored the $6 million, low-interest loan program that paid Watkins to develop the infrastructure of Farish Street, said he is more concerned about seeing some progress on the beleaguered project rather than listening to the back-and-forth.

"It's very frustrating that after 14 years, we haven't seen the area developed," Horhn said Monday. "I think that if cooler heads will prevail, and JRA and Mr. Watkins sit down and try to work their way through this process, we can get some develop on Farish Street, and very soon.

"There are other financial contributors and developers interested, but the current parties are so angry at each other that they can't see beyond playing a game of 'gotcha,' and yet the project is going wanting all this while."

That hope for a compromise took a hit last week, when JRA filed a lawsuit against the Farish Street Group and Watkins Development, LLC., seeking to expunge its name from liens and recoup nearly $5 million in penalties for breach of contract.

A copy of the lawsuit[LINK IT], provided to the Jackson Free Press by Watkins' attorney Lance Stevens, says liens filed by Ellis Custom Construction LLC. and Dale Partners Architects, P.A. are Watkins', and by extension, the Farish Street Group's problem, and that a third lien Watkins himself filed against JRA is unlawful.

Watkins filed that lien on behalf of his company Watkins Development on Oct. 7, 2013, and claims it "supplied equipment, labor, materials, and development services, and otherwise performed work on the project."

JRA says in the lawsuit that it never had any contract or agreement with Watkins Development, and is not indebted to that company "for any sums whatsoever."

Further, it alleges that Watkins' lien, filed through his company Watkins Development, was "done with gross negligence or malice, with the intent to coerce the JRA to reverse its termination of (The Farish Street Group)" and, therefore, is cause for Watkins to forfeit the money listed in the lien. In this case, that's the roughly $4.76 million Watkins says he had invested in Farish Street.

Because the property in question is publicly owned, JRA says it's unlawful for Watkins to file a lien. Under a provision in state law pertaining to debtor-creditor relationships, "any person who shall falsely and knowingly file the notice... without just cause shall forfeit to every party injured thereby the full amount for which such claim was filed."

Watkins has 28 days to respond.

Despite the acrimony, Stevens, speaking on behalf of Watkins, said there is still ample room for discussion between the parties to resolve the issue and get the project completed.

"We have offered that olive branch," he said.

Horhn said he can foresee an agreement where Watkins is involved but without serving in a leadership position.

"I think what needs to be developed is an exit strategy for Mr. Watkins from the Farish Street development, but one that compensates him fairly for the work that he's done," he said. "We're at a point where a new developer can come in with a fresh equity to get the thing done."

Oh, great, there's enough mixed questions of law and fact in here to keep any Farish Street development completely bottled up in court for years. We don't have that kind of time. Let's just throw everybody out and start over, what do you say?

The principles in this matter, all that have a valid, legal, say-so, need to be locked in a round room with perhaps a couple of port-a-johns and a pass through window for food and beverage and made stay there until a CONSENSUS (not compromise) is met.

It is absurd this has drug on so long when Jackson so badly needs a good downtown attraction to bring it back to life.

After living in Jackson over 40 years, a couple of years ago I moved to a farm and hour drive away and as I now watch from a distance I find myself growing more and more disappointed in the leadership in our capitol city.

This is too important for personalities to effect it. As I say, put them all in a locked round room and don't let them out until the reach a consensus.