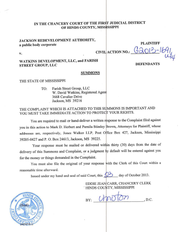 Not satisfied with removing David Watkins and his partners from the Farish Street project, the Jackson Redevelopment Authority is now going after Watkins’ money.

In an unexpected twist in the Farish Street saga, the Jackson Redevelopment Authority on Wednesday filed a lawsuit against the Farish Street Group and Watkins Development, LLC., seeking to expunge its name from liens and recoup nearly $5 million in penalties for breach of contract.

“Well, at least now we know what they were talking about in executive session, away from public and media scrutiny and beyond public input,” Watkins’ attorney Lance Stevens said Friday. “I was sitting in the JRA (meeting) Wednesday, and they did not ask me for anything or tell me anything. They went into executive session, and I was required to leave.”

The lawsuit, filed Oct. 23, 2013, and provided to the Jackson Free Press by Watkins’ attorney Lance Stevens, says liens filed by Ellis Custom Construction LLC. and Dale Partners Architects, P.A. are Watkins’, and by extension, the Farish Street Group’s problem, and that a third lien Watkins himself filed against JRA is unlawful.

Watkins filed that lien on behalf of his company Watkins Development on Oct. 7, 2013, and claims it “supplied equipment, labor, materials, and development services, and otherwise performed work on the project.”

JRA says in the lawsuit that it never had any contract or agreement with Watkins Development, and is not indebted to that company “for any sums whatsoever.”

Further, it alleges that Watkins’ lien, filed through his company Watkins Development, was “done with gross negligence or malice, with the intent to coerce the JRA to reverse its termination of (The Farish Street Group)” and, therefore, is cause for Watkins to forfeit the money listed in the lien. In this case, that’s the roughly $4.76 million Watkins says he had invested in Farish Street.

Because the property in question is publicly owned, JRA says it’s unlawful for Watkins to file a lien. Under a provision in state law pertaining to debtor-creditor relationships, “any person who shall falsely and knowingly file the notice… without just cause shall forfeit to every party injured thereby the full amount for which such claim was filed.”

Watkins has 28 days to respond.

Despite the acrimony, Stevens, speaking on behalf of Watkins, said there is still ample room for discussion between the parties to resolve the issue and get the project completed.

“We have offered that olive branch,” he said.

As Ron Burgundy once said: "Boy, that escalated quickly..."

What a bunch of crap. Watkins tries to save Farish Street, the JRA and the City, and this is what they throw back at him and how they treat him!

I hope he sues their butts off.

You think anybody will ever do business with the JRA or the City of Jackson again? Not.