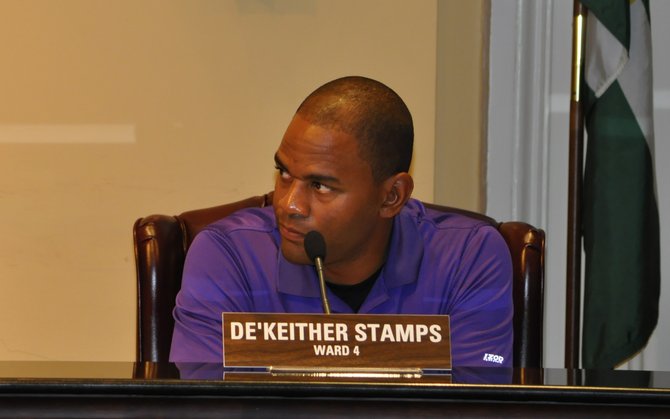 When the Jackson Free Press first met De'Keither Stamps, he invited reporters to his home to talk about the issues facing Jackson and his candidacy for the Ward 4 seat on the Jackson City Council.

You can tell so much about a person by his home, and Stamps is no exception. He's clean and neat as the living room of his Cedar Hills home that day—a discipline he learned in 12 years of military service.

The discipline and hard work Stamps learned in the military will be on full display this weekend, when he, constituents of his war and those across Jackson participate in a number of events that he believes all have the same goal—unifying the capital city.

"We have to separate ourselves from the people who truly love Jackson and those who just want to talk about Jackson and its future," said Stamps, who will rise early Saturday for a breast-cancer awareness walk before participating in a citywide cleanup effort the mayor's office is spearheading.

Stamps was the featured speaker at today's Friday Forum at Koinonia Coffee House in West Jackson, and said attendees asked questions across the gamut—including the controversies around Farish Street development and funding issues with the Jackson Zoo.

"Everybody loves the zoo, or used to love the zoo, but few of them go to the zoo," he said.

Since taking his seat on the council, Stamps, 36, has maintained a perfect attendance record, serves in some capacity on every council committee and is one of the most engaged council members on every issue, showing a willingness to question even sacred-cow issues, indicating early that his is an independent voice. The Forest Hill High School graduate serves on the boards of the Central Mississippi Planning and Development District and the Mississippi Municipal League.

His commitment to service isn't something he learned overnight. Stamps provided presidential security in 1996, and visited all 50 states in the process. His military service took him to Tanzania, Kenya, Switzerland, Great Britain and, eventually, Iraq, where he commanded a 17-man, 4-vehicle unit in Saddam Hussein's hometown of Tikrit.

Stamps was allowed a medical release in 2012 after fracturing multiple vertebrae in his back and suffering two heart attacks. He returned home to spend time with his three daughters—16-year-old Jasmine, 8-year-old Kristian and 5-year-old Kennedi.

"We were constantly under attack, so this wasn't a soft, cushy military job," he said. "When you are in a situation where your job is to stay alive and the other guy's job is to kill you, it can put some miles on your tires."

Stamps still owns the family farm on Highway 18, and spends his time away from city council tending to the cows, bailing hay and growing vegetables.

"It's funny," Stamps said. "I went into the military because farming was such hard work, and when I got out 12 years later, I went right back to it."