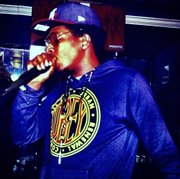 From hours of studio sessions to opening for countless hip-hop superstars, rapper Rozay Mo is definitely chasing his dreams of stardom in the music industry.

"A basketball player gets to the NBA by going to the gym (and) shooting jumpers every day," Mo says. "He's shooting 1,000 jumpers, 1,000 free throws, working out, doing everything. I know that my odds of making it are lower than going to the NBA, so I'm working every day."

Born Montrell Williams, the 25-year-old is the younger brother of NBA point guard Mo Williams. He is a 2006 Callaway High School graduate, and he got his entrepreneurship degree in 2011 from Jackson State University.

Mo recorded his first three songs in 2007. "That was the first time I ever recorded. I didn't really give any serious thought to it; it was just rapping." he says. "I really didn't envision this out of those three songs."

Mo has worked with a variety of Jackson artists who are also on the rise and has opened for rappers such as Big K.R.I.T., Bun B, Webbie and, most recently, for Rocko at Freelon's Bar and Groove.

He is currently working on a collaboration between rap duo SmokinAces—which is Rozay Mo and C-Lew—and R&B group Calico Panache, called "The Cali-Smoke-Pan-Aces."

"It should be some really good afro-centric groovy sounds," Mo says.

The city has immerse talent, Mo says, but the exposure isn't what it could be. "I feel like we (have) a lot of talent in Jackson, and we have a lot of talented DJs. I just feel like it's not put in the light like it should be. ... We cater to more outside music than we do to the music from the city. The talent is here, but we just need the outlets to let the world know."

Rozay Mo's next album, "Kush Kingdom," is set for release on his birthday, Oct. 24. Hear and download his music at rozaymo.bandcamp.com, and follow him on Twitter @RozayMo.