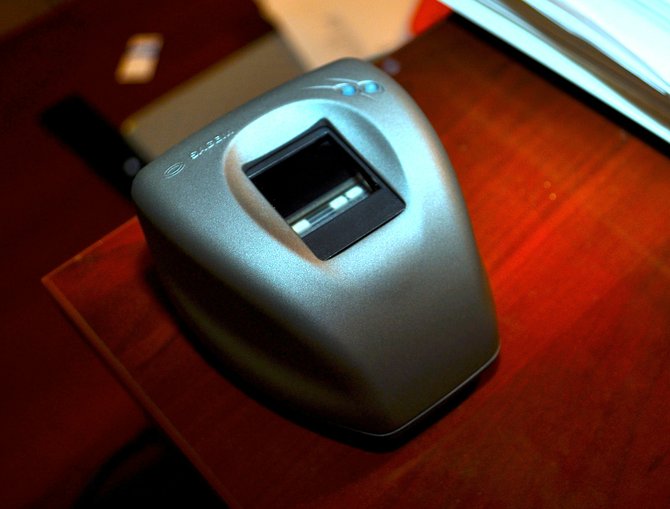 The City of Jackson was forced to adopt the State Department of Human Services' new policy of fingerprinting parents who get government assistance to pay for child care or risk losing its funding for the program. Photo by Trip Burns.

The State of Mississippi shook down Jackson yesterday, and Jackson went along with it.

At a special meeting of the city council, Mayor Chokwe Lumumba brought forth, on an emergency basis, a motion to bring all of Jackson's child-care facilities into compliance with a new state law requiring parents and guardians who receive government benefits to register their fingerprints each time they pick up and drop off their child.

The measure passed 4-2, but not before five of the six council members expressed their extreme displeasure with the idea.

"I don't like this," Lumumba said after the clerk read the order. "I really don't. But the alternative is to lose the programs. We cannot afford them without the $78,000 a month we get from the state, and they will pull that funding if we do not comply."

The two "nay" votes came from Ward 4 Councilman De'Keither Stamps and Ward 6 Councilman Tony Yarber, who relished the opportunity to vote in the negative while their colleagues made the responsible vote to keep the programs running.

"If we turned this order down, the fall-out would be on us," Yarber said. "It would be on us for shutting down a program that serves nearly 300 kids, and they know that. That political move has already been made."

Stamps urged Lumumba to make repeal of the state mandate one of Jackson's top legislative goals.

To make the order more palatable to the council, Lumumba also proposed a resolution urging the state to revisit its decision to go to the new fingerprinting system. The council's lone Republican, Quentin Whitwell, said he wouldn't support the resolution, but he would vote to bring it to a vote. The resolution ultimately failed when Stamps voted against it, saying the resolution wasn't sufficiently "strongly worded."

A JFP investigation earlier showed that, over the years, Xerox and its subsidiary, Affiliated Computer Systems, have banked millions of dollars in state contracts, including the agreement to manage the finger-scanner program. An acquisition-approval form dated Oct. 6, 2011, shows a contract between DHS and ACS that includes $1.7 million for 1,815 finger scanners and VeriFone machines that resemble credit-card readers, and another $12.8 million to service the equipment until 2017.

Xerox sent a letter to child-care providers in late July announcing the new child-care time and attendance program. The letter states that the new program requires the installation of new equipment, which comes at no cost to the provider. Also included in the 15-page packet were a provider agreement, a federal W-9 request for taxpayer-identification number form and a settlement authorization form. The settlement authorization form asks for providers' banking account and bank routing numbers in order to get paid.

This is simply more of the same: Republican owned businesses making money off of the poor and the under-represented. Just the cost of one scanning machine would be enough to house, clothe, and feed 300 children for many years to come. This is nothing but waste at its best.

Why were Lumumba and the Council apprised of this situations at the last minute?
This is reminiscence of the Scott Sisters' case. Haley Barbour, then gov. of the State of MS, demanded that the Scott Sisters never set foot on MS soil and that one sister would sign away her kidney to the sister who was in kidney failure. These women are paroled in the State of Florida; however, they were born and raised until there little scrape with the law where no one was killed, beaten, or harmed in any way by the two of them.

To add insult to injury, the Mayor had the gall to sit on stage with former gov.Haley Barbour a few weeks ago to discuss the building of a Civil Rights Museum. The denial of the rights of the Scott Sisters should be the only conversation between these two men relative to "Civil Rights".

I'm so tired of this policy of reactionary responses rather than proactive policies that will have a greater potential for more positive and equitable results.