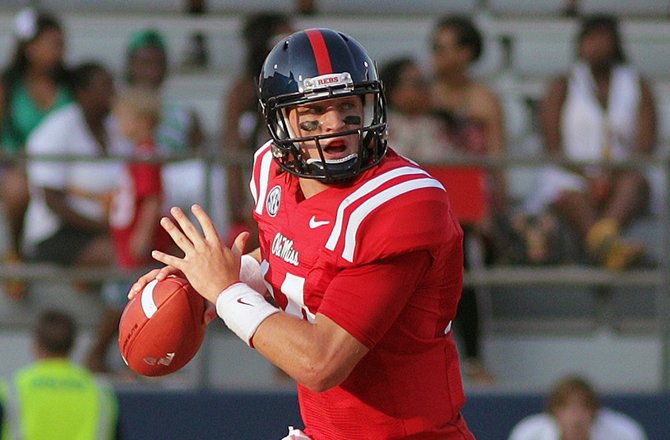 This year, fans will have a say in who wins the 2013 Conerly Trophy. In the past, only statewide media got to vote for the award.

Each of the 10 four-year universities and colleges with a college football team will nominate one player each to be a finalist for the award. Those 10 players will be announced on Nov. 25.

Mississippi State fans should vote for Gabe Jackson. The Bulldogs offensive guard is sure to go in the first round of the 2014 NFL Draft. If Jackson wins, he will be the first offensive lineman to win the award. He may be among the best offensive linemen in the state and quite possibly in the SEC, as well.

Ole Miss fans should vote for Bo Wallace. The Rebels quarterback, if nominated, will have a chance to be the only player to win the Conerly Trophy twice. Wallace is fourth on the school's passing yards (5,658), career passing touchdowns (39), career in total offense (6,280) and second in 300 yard passing games (7).

Jackson State should nominate quarterback Clayton Moore. If Moore wins, he will be the first Tiger to ever win the award, which almost seems unbelievable. Thanks to Moore's spectacular season, Jackson State will be playing in the SWAC title game despite a regular-season-ending loss to Alcorn State.

Cornerback Avery Boykin of Mississippi Valley State leads the SWAC with six interceptions. Boykin will be the first Delta Devil to win the award if he wins.

Two small school players who should earn votes are Mississippi College quarterback Jonathan Redd and Millsaps College running back Mike Barthelemy. No small-school player has won the Conerly Trophy since Juan Joseph took the award in 2008 for Millsaps.

Barthelemy ran for 1,386 yards and added a school-record 21 touchdowns. The running back helped the Majors to a 9-1 record this year. Millsaps' season ended with a loss in the regular season finale.

Fan voting will make up 10 percent of the vote with media making the other 90 percent. After the nominees are announced on Nov. 25, fans can begin voting on Nov. 26 at 8 a.m. and can continue to vote until 8 a.m. on Dec. 2.

When voting, fans—just like the media—must vote for a first, second and third place winner. Fans can vote via Facebook, Twitter or text (they can use all three different social media methods once-per-day for a total of three votes per day). For more information on fan voting and rules, visit cspire.com/conerly.

The 18th C Spire Conerly Trophy banquet is Dec. 3 at the Mississippi Sports Hall of Fame and Museum [add address!]. The banquet begins with a 5:30 p.m. reception followed by the 6:30 p.m. dinner program. Renowned TV sportscaster Ron Franklin will emcee the event. For tickets, call 601-982-8264.