Outlets, Tourism and the Walthall Hotel 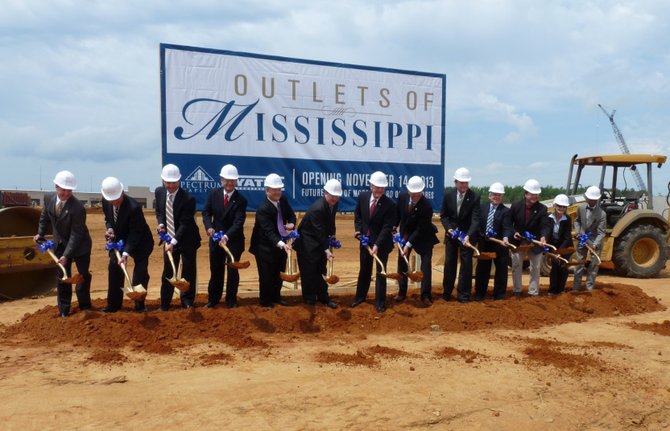 Yates Construction, Spectrum Capital and the state of Mississippi officially broke ground last week on the state's most aggressive commercial outlet to date, The Outlets of Mississippi in Pearl, even though construction has been happening for months. On May 9, Gov. Phil Bryant, Lt. Gov. Tate Reeves, House Speaker Philip Gunn, Pearl Mayor Brad Rogers and other elected officials gathered for a ceremonial groundbreaking for the benefit of the press on the 325,000-square-foot project.

Privately owned Spectrum Capital, a Jackson company, funded construction of the 80-store, $1 billion outlet, which will be the largest outlet-shopping destination in Mississippi. Located less than 10 minutes from Jackson and near the intersection of interstates 55 and 20, the center will create 1,600 jobs, promoters say.

"The retail business does a remarkable job of hiring people who are low-to-moderate income," Bryant said. "That means a lot of those people will come off of some type of government support that they might have and work here, so that's a double benefit for the state of Mississippi. But here in Rankin County, this will be a destination location. People will come from all over the United States and the southeast. We've got the Mississippi Braves and the Bass Pro Shop, now we have the one of the world's premier outlet malls. This is another key day for Mississippi's effort to move forward."

The project is expected to open Nov. 14, just ahead of the traditional holiday shopping season, and is set up to be a cultural experience for shoppers, not just commercial. Bryant said during the ceremony that the expected 4.5 million visitors each year will get a chance to "learn about Mississippi's history, listen to Mississippi's music and eat Mississippi's food."

In February, the Mississippi Legislature passed a bill to give $24 million in tax credits to developers of the outlet mall, designating the site "cultural retail" so it could take advantage of the credits normally reserved for tourism projects.

"It's amazing if you look at the last 30 days," Bryant said. "Two thousand jobs with the Yokohama Tire Company opening a factory in Clay County, (General Electric) opens its second jet engine factory in Ellisville, and Roxul, one of the world's leading insulation manufacturers, opening their first North American facility in Marshall County. It's keeping us busy, and it's great, because Mississippi works."

The investment in another tourist destination for the greater metro area comes on the heels of a report from the state outlining the positive effect tourism had on the capital city in 2012. According to a May 8 release from the Jackson Convention and Visitors Bureau, the city received an estimated 3.13 million visitors last year who spent around $300 million inside the city limits.

Tourism supported 20,378 jobs in the state according to the Mississippi Employment Security Commission. The payroll on those jobs is estimated at more than $4.2 million. All told, the state spent $11 million to promote Jackson, reported the Mississippi Development Authority.

MDA also estimates the average tax savings per household was roughly $550 in 2012.

Both Jackson's mayoral candidates who qualified for the May 21 Democratic runoff, Jonathan Lee and Chokwe Lumumba, agree that Jackson should become a destination city.

"I think it's important because all major cities nowadays, maybe always, have used that as a portion of their economy," Lumumba said in an interview last month with the Jackson Free Press. "I don't think we should get beyond ourselves. I don't think we should be thinking of ourselves as a New Orleans, or (an) Orlando, Florida, or something like that. That's primarily what they are."

Walthall Up for Grabs

The historic Edison Walthall Hotel will be up for grabs to the highest bidder in an online real-estate auction May 22.

The eight-story, 205-room hotel located at 225 East Capitol St., has an appraised value of $3.79 million, but its assessed value for tax purposes is just $569,261, the Mississippi Business Journal reports.

After the owners invested in a $10 million renovation just a few years ago, the Roberts Companies abandoned the hotel in 2010 after water pipes burst, flooding and damaging the bottom floors.