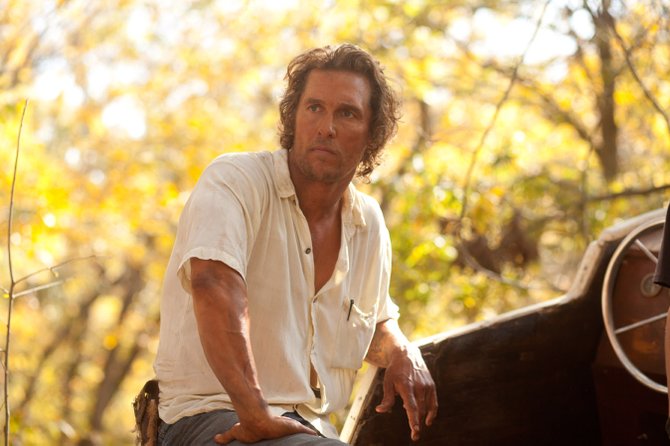 Arkansas-born director Jeff Nichols has an authentic, lyrical southern impudence in "Mud," which was a competition film at the Cannes Film Festival. Part "Huckleberry Finn," part river folklore and southern gothic, this film snuggles the senses like an old favorite T-shirt.

The story's so cozy and smooth that when the shirt is jerked off and the irascible Mud (Matthew McConaughey) is stripped of his loquacious facade, you don't feel cold at first. You hardly notice when it happens, but the next thing you know, Mud's emotional guts are hanging out.

Nichols tells Mud's story through the eyes of 14-year-old Ellis (Tye Sheridan). Ellis lives on a decaying houseboat with his parents on a muddy riverbank in Arkansas. Ellis is at the awkward age between cute boy and responsible young man. He's a tadpole swimming upstream to manhood.

The movie opens on Ellis sneaking off the houseboat before sunrise. On the way out, he eavesdrops on an intense discussion between his parents (Sarah Paulson and Ray McKinnon). He nudges his suspicions to the back of his mind and concentrates on spending some river time with his best buddy, Neckbone (Jacob Lofland).

Neckbone is a pint-sized redneck. He speaks plainly, and without a filter. He's got some funny, endearing quirks, like saying "Sh*t" in every sentence. He wears a Fugazi T-shirt, which is inherently interesting as the kid has a buzz cut and camouflage pants.

The boys head to a remote island on the Mississippi River. The camera swoops down into a misty-blue fog as the boys motor to their destination. You can almost smell the river and the adventure.

"There's a boat in a tree," Neckbone says. The boat is an anomaly on island that only grows trees and shelters cottonmouths.

This boat, however, already has an occupant. It's Mud, a rough guy who wears nail crosses in his boots to ward off evil spirits. He's an interesting character, inked with a slithering snake tattoo running down his arm to remind him that snakes bite.

This film has freshness, originality and an unusual serenity. It expresses feelings that haven't come out in movies in a long time and in a personal, novelistic voice. Nothing is wasted in the shots. Nichols spent 10 years tinkering with the script, layering it with depth.

"Mud" explores love's perplexities. Ellis experiences his first love with May Pearl (Bonnie Sturdivant), a buxom high-school junior to his peon-esque freshman status. Even though she towers over him, May Pearl openly flirts with Ellis.

Then there's the broken love between Ellis' parents and the disintegration of their marriage. Ellis is caught in the middle of his father's failure and his mother's struggle for independence.

The greatest and most complex love of all is Mud's love for Juniper (Reese Witherspoon). McConaughey's character really doesn't understand women any better than Ellis and Neckbone. His performance is mesmerizing, worthy of an Oscar nomination. He effortlessly switches back and forth from badass to starry-eyed lover. He's childlike and a sage of human experience.

We never know where the story is going, but we sit trustingly as the movie drifts along and things works themselves out.

With considerable shifts along the way, everything is still to the point, starting with the title: "Mud." Mud lies at the bottom of the river, but you can salvage some useful trash from it.

"You got to know what's worth keeping and what's worth loosing," says Galen, who makes his living from the river. This movie is a keeper.