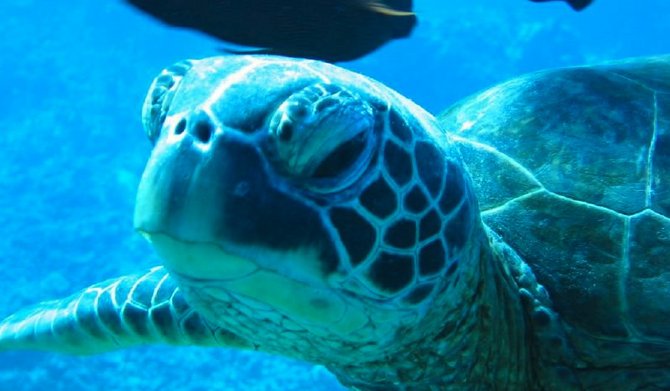 Scientists are discovering that sea turtles, long ignored by toxicologists who study wildlife, are highly contaminated with industrial chemicals and pesticides. Photo by Courtesy Flickr/fredsharples

From the moment they are born, sea turtles fight to survive. Buried alive, they dig themselves out and evade hungry crabs and birds as they crawl to the ocean, where they begin a long and treacherous migration. One out of 1,000 will survive into adulthood. And those that do will bear a toxic burden.

Scientists are discovering that sea turtles, long ignored by toxicologists who study wildlife, are highly contaminated with industrial chemicals and pesticides.

Loggerhead turtles have altered immune systems and smaller eggs that some studies have linked to contaminants. These chemicals kill turtle cells in lab experiments, and based on research in other marine life, scientists suspect that sea turtles may be vulnerable to thyroid, liver and neurological damage.

No one, however, knows the extent to which sea turtles in the wild may be harmed.

While other ocean creatures, including whales, seals and some fish, are well-studied, the chemical threats to sea turtles remain mostly hidden under a shell.

Decimated by climate change, poaching, accidental snaring and ocean trash, all U.S. species of sea turtles are protected by the Endangered Species Act, which makes studying them difficult.

"We really have just barely touched the tip of the iceberg," said Jennifer Keller, a marine biologist at the Hollings Marine Laboratory in Charleston, S.C. She is the top expert on pollution in sea turtles.

Sea turtles have some industrial compounds in their blood nearing levels that damage marine mammals. Keller's lab last year measured perfluorochemicals (PFCs) in the blood of five sea turtle species off the southeastern U.S. coast, and her calculations suggest that the turtles' potential risk for toxic effects is high.

"These chemicals may not acutely poison the animals, but they can make exposed individuals a little more vulnerable to opportunistic infections or new and emerging infectious diseases," said Peter Ross, a research scientist in Canada who is one of the world's leading experts on marine mammals and contaminants.

Some chemicals, particularly PCBs, have been shown to suppress the immune systems of wildlife, contributing to mass die-offs of seals and other marine mammals in the late 1980s and early 1990s.

This catastrophic damage hasn't been seen in turtles. Pollutants in their blood are orders of magnitude lower than levels in marine mammal blood, Keller said.

Nevertheless, Keller's research with loggerheads caught off South Carolina has linked immune system changes to a variety of contaminants. As levels of chlordane and mirex - two pesticides banned in the United States decades ago but still in the environment - went up in the turtles, their production of some disease-fighting immune cells decreased. And as PCBs and the pesticide DDT went up, some of their immune cells increased.

"Any alteration of immune function, even enhancement, can be considered an adverse effect," the authors wrote. Enhanced immune responses can lead to autoimmune diseases and hypersensitivity.

"Exposure to even relatively low concentrations of persistent pollutants can reduce the effectiveness of immune defense against any number of pathogens," Ross said.

The chemical soup inside turtles comes from the food they eat, which varies from the crab-eating Kemp's ridleys, jellyfish-eating leatherbacks, omnivorous loggerheads, spongivorous hawksbills and herbivorous green sea turtles.

Persistent organic pollutants magnify every step up a food web to top predators such as dolphins, seals and sea lions. Killer whales are the most contaminated wild creatures on the planet. Sea turtles vary in their pecking order, and chemicals build up in them accordingly. Because some can live to 100 years old, they can accumulate high levels of contaminants.

In leatherbacks, research has shown that some contamination is passed on to their eggs. PCBs and flame retardants correlate with smaller turtle eggs, according to a recent study by Keller. Research in birds has shown similar effects.

"If this is a cause and effect relationship, smaller eggs could lead to smaller hatchlings and reduced fitness," Keller said.

Young marine animals are most at risk. "It's in the young that we tend to see the most poignant evidence of effects, and those effects can be permanent," Ross said.

PFCs, used as water and grease repellants, have been found in humans and wildlife around the world. PFOS, or perﬂuorooctane sulfonate, produced by 3M and used in Scotchgard, was phased out in 2001, but remains the predominant PFC in the environment.

Keller found that PFOS was the main PFC in sea turtles, which is similar to what's found in other wildlife, said Craig Butt, an environmental chemist at Duke University.

"This is true whether you look at sea turtles off the coast of Georgia or polar bears in the Arctic," Butt said.

Concentrations of the five most abundant PFCs in these turtles are related to their different levels on the food web, with decreasing concentrations beginning with Kemp's ridley, then loggerhead, leatherback and green turtles.

Hawksbill turtles, which are spongivores, have "surprisingly high concentrations of PFOS and PFCs," the researchers wrote in the study. Crab-eating Kemp's ridleys had even higher levels. The data support previous PFC measurements in Kemp's ridley and loggerhead turtles.   In dolphins and some other marine mammals, PFCs have been linked to damage to the immune system, blood cells, kidneys and liver.

"We know they're exposed, and we know at least for PFOS, sea turtles approach concentrations that cause thyroid and neurological disruptions and immune suppression [in mammals]," Keller said.

To see if the damage to reptiles mirrors the damage seen in mammals, Celine Godard-Codding, an environmental toxicologist at Texas Tech University in Lubbock, has been examining how turtle cells respond to PFCs. Preliminary data from her lab found that PFOA doses that are toxic to mammalian cells will also kill 80 percent of reptilian cells tested. More recent experiments with PFOS found similar results.

The doses used are higher than those found in sea turtle blood. That's because PFCs build up in tissues, so an animal's cells will have more PFCs than its blood. No one has measured them in turtle tissues yet.

All five species of sea turtles in Keller's study were at risk for potential immune suppression, according to the researchers' estimated margins of safety. This calculation is based on effects seen in lab mice and rats. Regulatory agencies use these margins of safety to determine potential risk of toxic effects.

For the highly exposed hawksbills and Kemp's ridleys, the safety margins also put them at risk of liver, thyroid and neurobehavioral damage.

To learn more, Keller's lab is looking to the U.S. Pacific, where sea turtles haven't been tested for contaminants.

One hypothesis is that chemicals might be responsible for a virus, called fibropapillomatosis, that promotes the growth of tumors in the Pacific's sea turtles. If chemicals suppress their immune system, the virus could grow into tumors.

But so far Keller has not found any evidence of that. "Our pilot study is showing that it does not look like organic contaminants are the trigger or cause," she said.

Since the 2001 phaseout of PFOS, levels have decreased in many marine animals. From 2000 to 2008, PFOS declined by 20 percent annually in loggerhead turtles tested near Charleston, S.C. Yet PFOS and its precursors remain in older consumer products, and sea turtles remain contaminated.

"PFOS is still out there in consumer products. It's still on couches and carpets," Keller said. "Eventually those things are going to go to the landfill. We need better ways to dispose of them."